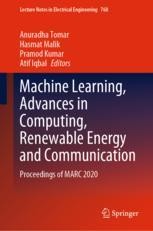 Dr. Anuradha Tomar has 12 years of experience in research and academics. She is currently working as Postdoctoral Researcher in Electrical Energy Systems Group, Eindhoven University of Technology (TU/e), the Netherlands, and is responsible for project management and research as a team member in European Commission’s Horizon 2020, UNITED GRID, and UNICORN projects. She is also associated as Associate Professor with the Electrical Engineering Department at JSS Academy of Technical Education, Noida, India. She has received her B.E. Degree in Electronics Instrumentation & Control with Honours in the year 2007 from the University of Rajasthan, India. In the year 2009, she has completed her M.Tech. Degree with Honours in Power System from National Institute of Technology, Hamirpur. She has received her Ph. D. in Electrical Engineering, from the Indian Institute of Technology Delhi (IITD). Dr. Anuradha Tomar has committed her research work efforts toward the development of sustainable, energy-efficient solutions for the empowerment of society and humankind. Her areas of research interest are photovoltaic systems, microgrid, energy conservation, and automation. She has authored or co-authored 69 research/review papers in various reputed international, national journals, and conferences. She is Editor for books with International Publication like Springer, and Elsevier. Her research interests include photovoltaic systems, microgrids, energy conservation, and automation. She has also filled seven Indian patents on her name. Dr. Tomar is Senior Member of IEEE, and Life Member of ISTE, IETE, IEI, and IAENG.

Professor (Dr.) Pramod Kumar is working as Professor, Head (CSE) & Dean (CSE & IT) in Krishna Engineering College, Ghaziabad, since January 2018. He also served as Director of the Tula’s Institute, Dehradun, Uttarakhand.  He has more than 22 years of experience in academics. He completed his Ph.D. in Computer Science & Engineering in 2011 and M.Tech. (CSE) in 2006. He is Senior Member of IEEE (SMIEEE) and Joint Secretary of IEEE U.P Section. He has published widely in international journals and conferences his research finding related to computer network, Internet of Things(IoT), and machine learning. He has authored/co-authored  more than 70 research papers and several chapters in edited books. He has supervised and co-supervised several M.Tech. and Ph.D. students. He has organized more than 10 IEEE international conferences and all the research paper of these conferences is now available in IEEE Explore. He is Editor of two books. He has conducted more than 15 Faculty Development Programs in the collaboration of EICT, IIT Roorkee, EICT, IIT Kanpur, and AKTU. He has organized IEEE National Workshop on research paper writing on March 27, 2017, and IEEE Women Symposium on February 21, 2016.