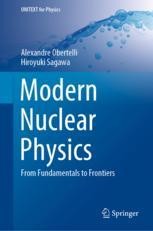 From Fundamentals to Frontiers

This textbook is a unique and ambitious primer of nuclear physics, which introduces recent theoretical and experimental progresses starting from basics in fundamental quantum mechanics. The highlight is to offer an overview of nuclear structure phenomena relevant to recent key findings such as unstable halo nuclei, superheavy elements, neutron stars, nucleosynthesis, the standard model, lattice quantum chromodynamics (LQCD), and chiral effective theory. An additional attraction is that general properties of nuclei are comprehensively explained from both the theoretical and experimental viewpoints. The book begins with the conceptual and mathematical basics of quantum mechanics, and goes into the main point of nuclear physics – nuclear structure, radioactive ion beam physics, and nuclear reactions. The last chapters devote interdisciplinary topics in association with astrophysics and particle physics. A number of illustrations and exercises with complete solutions are given. Each chapter is comprehensively written starting from fundamentals to gradually reach modern aspects of nuclear physics with the objective to provide an effective description of the cutting edge in the field.

Alexandre Obertelli received his Ph.D. degree from the University of Paris XI, France, in 2005. He is Alexander-von-Humboldt professor at the Technical University of Darmstadt, Germany. He carries experiments on the structure of radioactive nuclei at the Radioactive Isotope Beam Factory of RIKEN, Japan, at CERN, Switzerland, and GSI/FAIR, Germany.

Hiroyuki Sagawa is a senior visiting scientist at RIKEN, Japan, and a professor emeritus at the University of Aizu, Japan. He obtained his Ph.D. degree from Tohoku University in 1975. After he worked at the Niels Bohr Institute in Denmark, Paris-Sud University in France, and the National Superconducting Cyclotron Laboratory in USA, he was appointed as a research associate at the University of Tokyo and then moved to the University of Aizu as a full professor. His work mainly involves nuclear structure and reaction theory, and he also actively contributes to book publishing programs.