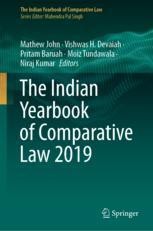 The Indian Yearbook of Comparative Law 2019

Dr. Mathew John is Professor at the Jindal Global Law School and also Executive Director of Centre for Public Law and Jurisprudence. His research spans the fields of public law, legal theory, and especially legal theory at the interface between constitutional and political theory. His research work has been facilitated by research fellowships at the London School of Economics, the Centre for the Study of Culture and Society, Bangalore, the Centre for the Study of Law and Governance, Jawaharlal Nehru University, and most recently at the Kate Hamburger Kolleg, at Bonn. He has qualified in law with a doctoral degree from the London School of Economics and Political Science, a master’s degree from the University of Warwick, and a bachelor’s degree from the National Law School of India University.Dr. Vishwas Devaiah is Professor at the Jindal Global Law School, Director of Centre for Postgraduate Law School. He is also Executive Director of the Centre for Intellectual Property and Technology Law (CIPTEL), and Co-director of JIRICO where he has led research and capacity building of JIRICO. He has served as the Managing Editor of JGLS’ flagship journal, Jindal Global Law Review (Springer). His primary areas of interest are intellectual property law, interface between IP and competition, health law, and biotechnology law. He has co-authored two open access books titled ‘Multi-dimensional Approaches Towards New Technology: Insights on Innovation, Patents and Competition’&‘Complications and Quandaries in the ICT Sector: Standard Essential Patents and Competition Issues’. He has published widely in Journal of Intellectual Property Law and Policy, Journal of World Intellectual Property, Asian Bioethics Review etc., and serves as a reviewer for the Asian Comparative Law Journal and the Indian Journal of Medical Ethics. He was awarded the 2015 Microsoft IP Teaching Fellowship to engage with researchers at University of Washington Law School in Seattle. He obtained a Ph.D. from the University of Liverpool, UK; an LL.M. degree from Warwick University, UK; and Bachelor of Law (B.A.L., LL.B.) degrees from University Law College, Bangalore University. Pritam Baruah is Associate Professor of Law at Jindal Global Law School. His research interests are in legal philosophy and constitutional theory. He was earlier a faculty at National University of Juridical Sciences, Kolkata and has served as Visiting Professor at Humboldt University, Berlin; National Law School of India University (Bangalore), China University of Political Science and Law (Beijing), and the University of Ottawa. He was a teaching fellow in jurisprudence at University College London where he co-founded UCL Legal Philosophy Forum. He has published in international and Indian journals including the Canadian Journal of Law and Jurisprudence, the NUJS Law Review, and in several edited international volumes including the Indian Yearbook of Comparative Law. Before joining academia, he practiced law at the Supreme Court of India. He has an integrated degree in law and humanities from NALSAR University of Law, Hyderabad; was Felix Scholar at the University of Oxford (BCL); and is Commonwealth Doctoral Scholar at University College London. Dr. Moiz Tundawala is Assistant Professor of Law at Jindal Global Law School in India. He completed his doctoral studies at the London School of Economics and Political Science. All through his academic career, Moiz has been a recipient of prestigious scholarships including a fully funded scholarship from the LSE for Ph.D., Felix scholarship for his Masters at SOAS, and a Microsoft Intellectual Property scholarship during the final year at the WBNUJS. Moiz has taught and researched in various institutions including JGLS, LSE, WBNUJS, and the National Law University, Delhi. He works in the areas of Indian constitutional thought, legal and political theory, modern intellectual history, and comparative public law. His scholarship is either forthcoming or published in the Journal of Political Theology, Asian Journal of Comparative Law, Indian Yearbook of Comparative Law, NUJS Law Review, and other edited volumes.Dr. Niraj Kumar is currently working as Associate Professor at National Law University, Delhi, where he is also Project Co-director of “Exploring the Nature of the Indian Legal System” at the Centre for Comparative Law. Prior to this, he was teaching at Faculty of Law, University of Delhi. He was Co-ordinator of the project of Ministry of Home Affairs on the ‘Study regarding Cadre Management of Indian Police Services officers’. He was also member of the Expert Committee constituted by Ministry of Labour& Employment to draft rules under the EPF Act. His recent publication is titled The Indian Legal System: An Enquiry 2019. He was Co-editor of The Indian Yearbook of Comparative Law 2018 and Open Markets, Free Trade and Sustainable Development - Perspectives from the EU and India, which have been published by Springer. His areas of interest are comparative law, administrative law, constitutional law, environmental law, interpretation of statutes, and jurisprudence.