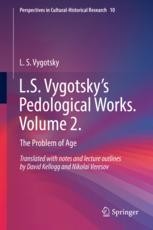 The Problem of Age

This book is the second volume in a series presenting new English translations of L.S. Vygotsky’s writings on the holistic science of the child he called “pedology”. It presents unique materials which reflect the development of Vygotsky’s theoretical position at the last stage of his creative evolution in 1932-1934 and contributes to the number of original Vygotsky texts available in English. It includes the problem of age and age periodization; the structure and dynamics of age, psychological characteristics of age crises and diagnostics of development in relation to age, and the zone of proximal development, which became his most widely known but least understood theoretical innovation. This book places that concept in its context and makes it fully understandable for the first time. In addition, there are lectures and notes that Vygotsky made in preparation for lectures on six critical periods: birth, one year old, three, seven, and thirteen. Vygotsky also devotes chapters to the stable periods of infancy and early childhood and two whole chapters to school age. Future volumes in this series will explore Vygotsky’s pedology of the adolescent.

L.S. Vygotsky was a Soviet thinker, teacher, and writer who worked in psychology, education, and the holistic science of child development then called pedology. In a short career of only a decade, he created works that transformed the way we connect history, culture, and human development today.

Nikolai Veresov is currently an associate professor at Monash University. He was a researcher in Finland and in Russia, where he studied psychology with leading lights of the cultural historical school such as V.V. Davydov. He has published widely on Vygotsky in many languages, including Vygotsky’s native language; he is currently an editor of the Cultural Historical Research book series with Springer. His current work is on education of early years in Australia.  He is the translator of Vygotsky’s “Consciousness as  Problem in the Psychology of Behavior” (1999) and “The Role of Play in the Development of the Child (2016)”. He has also translated the work of D. B. Elkonin on periodizing child development. (2000).

David Kellogg is currently an assistant professor at Sangmyung University. He is the author of over fifty articles in international journals on cultural-historical psychology, systemic-functional linguistics, and teaching/learning,  He and his former students have published twelve volumes of Vygotsky translations in Korea.