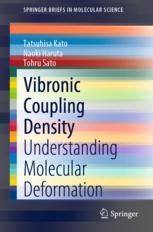 This book introduces vibronic coupling density and vibronic coupling constant analyses as a way to understand molecular structure and chemical reactions. After quantum study, the behavior of electrons circulating around nuclei led to the principal concept that underlies all explanations in chemistry. Many textbooks have given plausible explanations to clarify molecular structure—for example, the bond elongation of ethylene under anionization and the nonplanar structure of ammonia. Frontier molecular orbital concepts were proposed to visualize the path of chemical reactions, and conventional explanations gave students a familiarity with molecular structures in terms of the electronic state.  By contrast, this book offers a more rational and more convincing path to understanding. It starts from the ab initio molecular Hamiltonian and provides systematic, rational approaches to comprehend chemical phenomena. In this way, the book leads the reader to a grasp of the quantitative evaluation of the force applied under the molecular deformation process. As well, guidelines are offered for integrating the traditional “hand-waving” approach of chemistry with more rational and general VCD and VCC alternatives along with the outlook for newly functionalized chemical systems.

Tatsuhisa Kato received his Ph.D. from Kyoto University in 1984.  His research interests include molecular spectroscopy, especially electron magnetic resonance and electron spin resonance (ESR) spectroscopy. He has clearly characterized the electronic and spin states of fullerene species by ESR spectroscopy and exercises worldwide leadership in fullerene chemistry. As of April 2020, he has published 157 articles in internationally renowned journals such as Nature, Science, and the Journal of the American Chemical Society. He was awarded the Society Award by the Society of Electron Spin Science and Technology, Japan, in 2017.