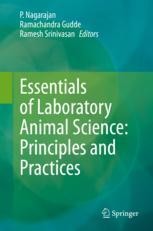 Dr. Ramachandra, S.G. graduated from Bangalore Veterinary College in 1987 and subsequently completed post-graduation and PhD in Veterinary Pharmacology and Toxicology from Bangalore Veterinary College. He has been working in the field of Laboratory Animal Science for the last twenty-nine years and is currently working as Chief Research Scientist and In-charge of the Central Animal Facility at the Indian Institute of Science, Bangalore. He has undergone several advanced trainings on laboratory animal medicine and surgery at USA, Germany, Taiwan and Japan. He is associated with various regulatory authorities such as CPCSEA (Ministry of Animal Husbandry and Dairying, Govt. of India), NGCMA (DST, Govt. of India) etc., as Laboratory Animal expert. He has organized several national and international conferences/ workshops on Laboratory Animal Science. He has established the Laboratory Animal Scientists’ Association (LASA) and served as Founder President for nine years (2004-2013). He has also served as Vice President of Asian Federation of Laboratory Animal Science Associations (AFLAS), Japan. Established “Journal of Laboratory Animal Science” and serving as Editor-in-Chief. He has been nominated as “Fellow” by the National Academy of Veterinary Science, New Delhi and bestowed with “Nakula” award by the Karnataka Veterinary Association for his significant contribution in the area of Laboratory Animal Science. He has provided technical guidance in establishment of more than 15 laboratory animal facilities in the country. He is also actively involved in research and developed rapid diagnostics kits for the detection for six different pathogens of laboratory animals.  He has published 90 research papers in peer reviewed national and international journals. He has delivered 90 “invited” lectures at national and international conferences including Germany, Thailand, Korea, China, Srilanka, South Africa, Taiwan and UK.
Dr. Ramesh.S., is currently serving as Professor and Head, Department of Veterinary Pharmacology and Toxicology, Madras Veterinary College, Tamil Nadu Veterinary and Animal Sciences University at Chennai, India. He has a teaching experience of 26 years. He teaches the subjects of pharmacology and toxicology to veterinary graduate, post-graduate and doctoral students. He has so far guided 10 dissertation works. His research interest areas include pharmacokinetics of antibacterial drugs, veterinary drug residues and antimicrobial chemotherapy. He has published about thirty research papers in peer-reviewed journals. He has authored one chapter in a book and brought out practical manuals for students and trainees. He has developed E-learning contents in veterinary pharmacology. He has acquired knowledge and expertise in laboratory animal sciences such as biology, housing, handling, ethics, design, pharmacology and toxicology. Since 2013, he has organized the Certificate Course in Laboratory Animal Sciences at Chennai, India, the only course outside Europe to be accredited by FELASA. He has also developed training modules in laboratory animals catering to research scholars and laboratory animal caretakers. He serves in the editorial of Journal of LASA India and is a member of many scientific societies.
Dr. Nagarajan.P is working as Head, Scientist at Laboratory Animal Facility, National Institute of Immunology, New Delhi, India. Being a veterinarian, he has been working on laboratory animals for more than 20 years. He has vast knowledge and expertise in care, management, breeding and medicine of laboratory animals including genetically modified animals, immunodeficient animal model, humanized animal models and non-human primates that are being used in research. Before joining NII, he worked at Central Drug Research Institute (CDRI) and National University of Singapore (NUS). He had undergone a diverse training in Laboratory animals including imaging modalities and microsurgery abroad. His research interest is on animal models for various diseases and in particular metabolic diseases. He has published more than 35 research articles in peer-reviewed international journals and authored book chapters. He is also serving as a reviewer for various International journals and he is a member of several national and international scientific societies related to laboratory animal science.