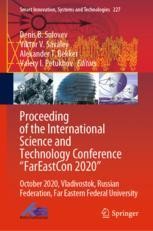 Proceeding of the International Science and Technology Conference "FarEastСon 2020"

This book presents the proceedings of the International Science and Technology Conference “FarEastCon 2020,” which took place on October 6–9, 2020, in Vladivostok, Russian Federation. The conference provided a platform for gathering expert opinions on projects and initiatives aimed at the implementation of far-sighted scientific research and development and allowed current theoretical and practical advances to be shared with the broader research community. Featuring selected papers from the conference, this book is of interest to experts in various fields whose work involves developing innovative solutions and increasing the efficiency of economic activities.

Denis B. Solovev is a graduate of Far Eastern State Technical University (Diploma with honours), Vladivostok, Russia. In 2011, he received a Ph.D. in Electric Engineering. From 2011 to 2017, he took internship in the leading Russian and international universities and research laboratories: MATI - Russian State Technological University named after K.E. Tsiolkovsky, Moscow; University of Maastricht, Maastricht (Netherlands); Laboratory of the Ministry of Energy of the United States of America, Seattle and Richland, Washington; Swiss Federal Institute of Technology Zurich, Zurich; Department of Electrical and Electronic Engineering Hong Kong University of Science and Technology, Hong Kong SAR, Hong Kong; Japan Society for the Promotion of Science Faculty of Engineering, Aichi Institute of Technology, Toyota, Japan. He is currently Head of the educational program “Innovatica” (cluster of energy and electronics) at the Engineering School of the Far Eastern Federal University, Vladivostok, Russia. His research interest covers electrical energy and power technologies for smart energy conversion, integration, distribution, and utilization, including electric motors and drives, electric generators; electric vehicle technologies, vehicle-to-home, vehicle-to-vehicle, vehicle-to-grid; smart grid & microgrid technologies; sustainable & renewable energy systems; wireless power transfer technologies; and smart devices for robotics. Dr. Denis B. Solovev is Senior Member of the IEEE and Member of IEEE Societies of IES and PES and serves as Reviewer for over 30 international journals. He has published over 150 leading papers in journals and over 40 papers in conferences in 2001–2017.

Alexander T. Bekker, Ph.D., is Full Professor and Director of the School of Engineering of Far Eastern Federal University (FEFU), Vladivostok, Russia. He has completed his postgraduate education in Leningrad Electrotechnical Institute, Leningrad, in 1985–1988; received Ph.D. degree in Electrical Engineering from the Leningrad Electrotechnical Institute, Leningrad, in 1988; been a postdoctorate trainee in the FESTU in 2002–2005; received the Doctor of Science degree in Control Engineering from the Russian Academy of Sciences, Vladivostok, in 2006. He has completed Ph.D., Economics, from Far Eastern Federal University, Russia, in 2010. He has published more than 200 scientific publications (6 books, 7 booklets).

Valery I. Petukhov, Ph.D., is Full Professor and Deputy Director for Scientific Work of Far Eastern Federal University (FEFU), Vladivostok, Russia. In 1971, he has graduated from the Far Eastern Federal University majoring in "Oceanology." He has completed Ph.D. in Economics from Far Eastern Federal University, Russia, in 2005. From 1999 to 2011, he served as  Director of the Institute of Engineering and Social Ecology. Since 2011 till present, he is Deputy Director of the DVFU Engineering School for Development, and Head of the Department of Safety in Emergency Situations and Environment Protection. He is the honorary worker of higher education and the author of more than 130 published works. He has vast experience of implementation of educational and scientific projects and also experience of commercialization of technological developments and creations of the successful innovative enterprises.