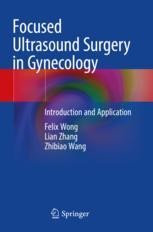 This book aims to provide readers up-to-date information about focused ultrasound surgery in gynecology, an innovative technique with increasing acceptance to treat fibroids and adenomyosis. Beginning with an introductory description of the mechanism of focused ultrasound surgery (FUS) and the available HIFU device developed, this book introduce the application of FUS in uterine fibroids, adenomyosis, and other gynaecological conditions with details in its technology and procedures. This book will be an invaluable reference for practicing gynecologists and practitioners to understand this new surgical approach in the management of different gynecological conditions

Professor Felix Wong is at present the Adjunct Professor at the University of New South Wales. He was the past Professor and Medical Director of Liverpool Hospital in Sydney, Australia. He had contributed to medical education in Asia Pacific Countries over the past 30 years. In recognition of his contributions to teaching, he received many awards and honors. In 2009, he received the Endos Award in Medical Science and Technology, China, for his excellent achievement in Endoscopic surgery. In 2017, he was granted Lin Qiaozhi Cup by the Chinese Obstetricians and Gynecologists Association (COGA) to recognize his significant contribution to obstetrics and gynecology in China. In 2017, he was honored by Lifetime Achievements Award by Asia-Pacific Association for Gynecologic Endoscopy and Minimally Invasive Therapy (APAGE). In 2018, he was awarded by the European Society for Gynecological Endoscopy (ESGE) for Outstanding Contribution Award. Professor Wong had edited 12 medical books and had published more than 200 papers in local and international journals. He is currently the Chairman of the China-Asia Pacific Association of Minimally Invasive Gynecologic Oncologists (CA-AMIGO) and Foundation Chairman of China-Australia-Asia Pacific Forum of Minimally Invasive Surgery, and Vice President of the World Association of Chinese Obstetricians and Gynecologists.

Professsor Wong had edited 14 medical books and had published more than 200 papers in local and international journals. He retired from the university in 2010. Despite his unique endoscopic experience, he continues to contribute towards the development of HIFU education and services in China and Asia Pacific Areas.

Professor Lian Zhang graduated from Chongqing Medical University in 1987, studied in UCSD in 1998, and, after returning to China in 2004, worked in the Oncology Center of the Second Hospital Affiliated to Chongqing Medical University. He was one of the chief researchers working to develop HIFU (high-intensity focused ultrasound) system. He was in charge of (or participated in) multiple scientific research projects. He was awarded multiple city-level and national-level scientific awards.

Over the last 10 years, he was at CIRSE, WCIO, SIUMB, PARIS, and among others, as an invited speaker. Prof. Lian Zhang’s research areas and interests extend to anatomy, molecular biology, molecular genealogy, oncology, etc.  He has published more than 80 papers in the peered review journals such as Acta Obstet Gynecol Scand., BJOG., Int J Gynaecol Obstet. Circulation, Journal of Clinical Investigation, Radiology, European Radiology, European Journal of Radiology, American Journal of Roentgenology, Ultrasounics Sonochemistry, International Journal of Hyperthermia and Medicine.

He is now responsible for training HIFU surgeons or physicians worldwide. He is currently the Secretary General of the International Society of Minimally Invasive and Virtual Surgery, the Secretary General of the Minimally Invasive and Noninvasive Medical Committee of Chinese Medical Doctor Association. He serves as a section editor of the International Journal of Hyperthermia.

Professor Zhibiao WANG, MD/Ph.D, Professor of ObGyn and Biomedical Engineering, Ph.D. student supervisor, Senior Consultant of ObGyn, Chongqing Medical University; Director of the National Engineering Research Center of Ultrasound Medicine (NERCUM) and the State Key Laboratory of Ultrasound in Medicine and Engineering, respectively; Council member of the International Society of Minimally Invasive and Virtual Surgery (ISMIVS). Professor Wang is the Principal Investigator of the research grant awarded by the National Key Basic Research and Development Program (973 Program) in 2010 and the special fund for the Development of major Scientific Research Equipment awarded by the National Natural Science Foundation of China. He was the recipient of the National Science Fund for Distinguished Young Scholars, the second prize of the State Technological Invention Award in 2000, the HLHL (HO LEUNG HO LEE) Advancement Prize in 2008, the second prize of the National Science and Technology Progress Award in 2010, and the National Innovation Award in 2020.

Prof. Wang has devoted for decades to the development and clinical implementation of minimally invasive and non-invasive treatment of common gynecological diseases, such as uterine fibroids, adenomyosis, cervicitis, non-neoplastic epithelial disorders of the vulva, etc.

Since 1988, adhering to the medical philosophy of “Treatment-minimize harm to patients”, Professor Wang has a long track record of innovative and original research on the theoretic framework of therapeutic ultrasound, its clinical translation, and clinical development of focused ultrasound therapies. He proposed for the very first time the concept of “Biological Focal Region”, laying the theoretic foundation for clinical application of focused ultrasound ablative therapy. His team successfully developed the world-first High Intensity Focused Ultrasound Tumor Therapeutic System, the JC series with independent intellectual property rights. It led the clinical development and global deployment of HIFU technology, realizing the medical dream of non-invasive extracorporeal treatment of the lesions within the body. At present, a series of ultrasound therapy devices developed by Prof. Wang’s team is being used by more than 2,800 hospitals worldwide, having treated more than 150,000 patients with benign and malignant diseases, such as uterine fibroids, liver cancer, breast cancer, and osteosarcoma, etc., and more than 2 million patients with non-tumor diseases.