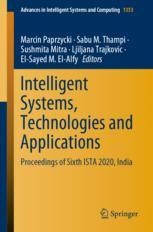 This book offers to readers a selection of refereed papers that were presented at the Sixth International Symposium on Intelligent Systems Technologies and Applications (ISTA’20). All submissions were evaluated on the basis of their significance, novelty, and technical quality. This book consists of 28 papers (19 regular and 9 short papers) that were virtually presented at the Symposium. The papers cover different areas such as big data analytics, security and privacy, Internet of things, machine and deep learning, health informatics, visual computing, signal processing, and natural language processing. The book is directed to the researchers and scientists engaged in various fields of intelligent systems.

Marcin Paprzycki is Associate Professor in the Systems Research Institute, Polish Academy of Sciences, Warsaw, Poland. He has an M.S. from Adam Mickiewicz University in Poznań, Poland, a Ph.D. from Southern Methodist University in Dallas, Texas, and a Doctor of Science from the Bulgarian Academy of Sciences. He is a senior member of IEEE, a senior member of ACM, Senior Fulbright Lecturer, and IEEE CS Distinguished Visitor. He has contributed to more than 500 publications and was invited to the program committees of over 800 international conferences. He is on the editorial boards of 12 journals and a book series.

Sabu M. Thampi is Professor at the Indian Institute of Information Technology and Management-Kerala (IIITM-K), Technopark Campus, Trivandrum, Kerala, India. His current research interests include cognitive computing, Internet of things (IoT), authorship analysis, trust management, biometrics, social networks, nature-inspired computing, and video surveillance. He has published papers in book chapters, journals, and conference proceedings. He has authored and edited a few books. Sabu has served as Guest Editor for special issues in few journals and a program committee member for many international conferences and workshops. He has co-chaired several international workshops and conferences. He has initiated and is also involved in the organization of several annual conferences/symposiums. Sabu is currently serving as Editor for Elsevier Journal of Network and Computer Applications (JNCA), Connection Science,  Taylor & Francis, Associate Editor for IEEE Access and International Journal of Embedded Systems, Inderscience, UK, and Reviewer for several reputed international journals. Sabu is a senior member of IEEE and ACM. He is Founding Chair of ACM Trivandrum Professional Chapter.

Sushmita Mitra is full Professor at the Machine Intelligence Unit (MIU), Indian Statistical Institute, Kolkata. From 1992 to 1994 she was in the RWTH, Aachen, Germany as a DAAD Fellow. She was a Visiting Professor in the Computer Science Departments of the University of Alberta, Edmonton, Canada in 2004, 2007; Meiji University, Japan in 1999, 2004, 2005, 2007; and Aalborg University Esbjerg, Denmark in 2002, 2003. Dr Mitra received the National Talent Search Scholarship (1978-1983) from NCERT, India, the University Gold Medal in 1988, the IEEE TNN Outstanding Paper Award in 1994 for her pioneering work in neuro-fuzzy computing, the CIMPA-INRIA-UNESCO Fellowship in 1996, and Fulbright-Nehru Senior Research Fellowship in 2018-2020. She was the INAE Chair Professor during 2018-2020. Dr. Mitra is the author of the books ``Neuro-Fuzzy Pattern Recognition: Methods in Soft Computing" and ``Data Mining: Multimedia, Soft Computing, and Bioinformatics" published by John Wiley, and ``Introduction to Machine Learning and Bioinformatics", Chapman & Hall/CRC Press, beside a host of other edited books. Dr Mitra has guest-edited special issues of several journals, is an Associate Editor of ``IEEE/ACM Trans. on Computational Biology and Bioinformatics", ``Information Sciences", ``Fundamenta Informatica", and is a Founding Associate Editor of ``Wiley Interdisciplinary Reviews: Data Mining and Knowledge Discovery (WIRE DMKD)". She has more than 150 research publications in refereed international journals. Dr Mitra is a Fellow of the IEEE, Indian National Science Academy (INSA), International Association for Pattern Recognition (IAPR), and Fellow of the Indian National Academy of Engineering (INAE) and The National Academy of Sciences, India (NASI). She is an IEEE CIS Distinguished Lecturer and the current Chair-Elect, IEEE Kolkata Section. She has visited more than 30 countries as a Plenary/Invited Speaker or an academic visitor, and served as General Chair and/or Program Chair of several international conferences. Her current research interests include data mining, pattern recognition, soft computing, medical image processing, and Bioinformatics.

She is currently a Professor in the School of Engineering Science at Simon Fraser University, Burnaby, British Columbia, Canada. From 1995 to 1997, she was a National Science Foundation (NSF) Visiting Professor in the Electrical Engineering and Computer Sciences Department, University of California, Berkeley. She was a Research Scientist at Bell Communications Research, Morristown, NJ, from 1990 to 1997, and a Member of the Technical Staff at AT&T Bell Laboratories, Murray Hill, NJ, from 1988 to 1990. Her research interests include high-performance communication networks, control of communication systems, computer-aided circuit analysis and design, and theory of nonlinear circuits and dynamical systems.

El-Sayed M. El-Alfy is a Professor in Information and Computer Science Department, King Fahd University of Petroleum and Minerals (KFUPM), Saudi Arabia. He has more than 25 years of experience in industry and academia involving research, teaching, supervision, curriculum design, program assessment and quality assurance in higher education. He is approved ABET/CSAB Program Evaluator (PEV), IEEE Senior Member, and reviewer and consultant for NCAAA and several universities and research agents in various countries. He is an active researcher with interests in fields related to machine learning and nature-inspired computing and applications to data science and cybersecurity analytics, pattern recognition, multimedia forensics and security systems. He has published numerously in peer-reviewed international journals and conferences, edited a number of books published by reputable international publishers, attended and contributed in the organization of many world-class international conferences, supervised master and Ph.D. students, served as a guest editor for a number of special issues in international journals, and been in the editorial board of a number of premium international journals including IEEE/CAA Journal of Automatica Sinica, IEEE Transactions on Neural Networks and Learning Systems, International Journal on Trust Management in Computing and Communications, and Journal of Emerging Technologies in Web Intelligence (JETWI). He is also a member of IEEE Computational Intelligence Society, and x-member of ACM and IEEE Computer Society. His work has been internationally recognized and received a number of awards.