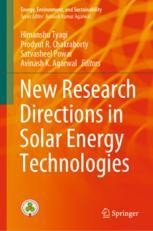 Applications of solar energy have been expanding in recent years across the world. This monograph details such far-reaching and important applications which have the potential for large impact on various segments of the society. It focuses solar energy technologies for various applications such as generation of electric power, heating, energy storage, etc. This volume will be a useful guide for researchers, academics and scientists.

Dr. Himanshu Tyagi is an Associate Professor in the School of Mechanical, Materials and Energy Engineering, Indian Institute of Technology Ropar (IIT), India. He has previously worked at the Steam Turbine Design Division of Siemens (Germany and India) and at the Thermal and Fluids Core Competency Group of Intel Corp. (USA). He received his Ph.D. from Arizona State University, USA, in the field of heat transfer and specifically looked for the radiative and ignition properties of nanofluids. He obtained his Master's degree from University of Windsor, Canada, and his Bachelor's in Mechanical Engineering from IIT Delhi. At present, he is working to develop nanotechnology-based clean and sustainable energy sources with a team of several Ph.D. scholars, postgraduate, and undergraduate students. Among other awards, he has received Summer Undergraduate Research Award (SURA) from IIT Delhi, International Graduate Student Scholarship from University of Windsor Canada, Indo-US Science and Technology Forum (IUSSTF) grant awarded for organizing an Indo-US Workshop on ‘Recent Advances in Micro/Nanoscale Heat Transfer and Applications in Clean Energy Technologies’ at IIT Ropar.

Dr. Prodyut R. Chakraborty is an Associate Professor in the department of Mechanical Engineering, Indian Institute of Technology (IIT) Jodhpur, India. He received his Bachelor's in Mechanical Engineering from the North Bengal University in 2000, and his M.Sc Engineering in 2004, and Ph.D. in 2011 from the Indian Institute of Science, Bangalore, India. He served two years at the Department of Material Physics in Space in German Aerospace Center (DLR), Cologne as a postdoctoral research fellow. He also worked as a Research Analyst at the Applied CFD Lab, G.E. Global Research Center Bangalore. His primary area of research is numerical modeling of alloy solidification, latent heat based energy storage systems for high temperature applications, thermal management and thermal comfort, and sorption cooling.

Dr. Satvasheel Powar is an Assistant Professor in the School of Engineering, Indian Institute of Technology (IIT) Mandi. He received a Bachelor of Production Engineering from Shivaji University in 2003, and M.Sc. (Mechanical Engineering) from Dalarna University, Sweden in 2005. He then served Greatcell Solar S.A., Switzerland, and G24i, the UK with a work focus on scalable process development. He received his Ph.D. in Chemistry/Materials Engineering from Monash University, Australia in 2013. Before joining IIT Mandi, he served at Nanyang Technological University, Singapore as a postdoctoral research fellow. His primary area of research is new generation solar photovoltaic and solar thermal utilization. Dr. Powar received a Bhaskara Advanced Solar Energy fellowship by Indo-US Science and Technology Forum (IUSSTF) to visit Lawrence Berkeley National Laboratory, University of California, Berkeley, USA for three months.