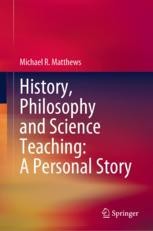 This book is an historical narrative of academic appointments, significant personal and collaborative research endeavours, and important editorial and institutional engagements. For forty years Michael Matthews has been a prominent international researcher, author, editor and organiser in the field of ‘History, Philosophy and Science Teaching’.  He has systematically brought his own discipline training in science, psychology, philosophy of education, and the history and philosophy of science, to bear upon theoretical, curricular and pedagogical issues in science education. The book includes accounts of philosophers who greatly influenced his own thinking and who also were personal friends – Wallis Suchting, Abner Shimony, Robert Cohen, Marx Wartofsky, Israel Scheffler, Michael Martin and Mario Bunge.  It advocates the importance of clear writing and avoidance of faddism in both philosophy and in education. It concludes with a proposal for informed and enlightened science teacher education.

Michael R. Matthews is Honorary Associate Professor in the School of Education at the University of New South Wales.  He has degrees in Geology, Psychology, Philosophy, History and Philosophy of Science, and Philosophy of Education.  He has taught in high school, teachers’ college and universities; was Foundation Professor of Science Education at the University of Auckland; was Foundation President of the International History, Philosophy and Science Teaching Group; is a Fellow of the Royal Society (New South Wales).

“Michael Matthews has probably done more for the history and philosophy of science education than anyone else. This book is a riveting read. Beginning with his childhood Catholic education in Australia, it discusses the importance of his school and extensive university education, some of the latter undertaken part-time while school teaching, before focusing on Matthews’ academic career, which began in 1972. There are fascinating accounts about the journal Science & Education, the debates over constructivism, and fundamental conceptual issues that lie at the heart of science and science education. All in all, this is an essential read for anyone interested in science education, written by one of those who has played a central role in the discipline.” — Michael J. Reiss, Professor of Science Education, University College London
“The work of Michael Matthews in emphasizing the role of history and philosophy of science in science education has been truly monumental.  This has included his founding and editing of the journal Science and Education for 25 years and his leadership of the International History, Philosophy and Science Teaching Group (IHPST).  Even more monumental is this much anticipated intellectual biography in which he recalls his early influences and subsequent intellectual encounters within diverse areas, including Catholicism, constructivism, the life and work of Joseph Priestley and the physics of the pendulum.” — Eric Scerri, Chemistry Department, University of California Los Angeles
“Matthews records his intellectual maturation and career in a rich personal narrative, ranging from family roots, high school teaching, university lecturing and international conference debates, to research and publications spanning a wide range of disciplines. These include philosophy and history of science, philosophy of education, intellectual history and cross-cultural issues. It is a fascinating trajectory through the major science educational ideas, trends and upheavals of the last four decades. He remains a sombre voice of reason, of Enlightenment virtues, of liberal education and of sound teacher education and science teaching. His views, opinions and insights serve as a pedagogical guiding compass in a time when scientific knowledge and specialist communities are targeted by social media trolls, fundamentalists and mystics, and when the very cognitive and educational core values of modern science and science education are both increasingly attacked and disparaged by a variety of cultural, epistemological and pedagogical relativists.” — Roland M. Schulz, Centre for Imagination in Research, Culture and Education, Simon Fraser University.