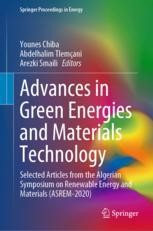 This book presents selected articles from the Algerian Symposium on Renewable Energy and Materials (ASREM-2020) held at Médéa, Algeria. It highlights the latest advances in the field of green energies and material technology with specific accentuation on numerical plans and recent methodologies designed to solve engineering problems. It includes mathematical models and experimental measurements to study different problems in renewable energy and materials characterization, with contributions from experts in both academia and industry, and presents a platform to further collaborations in this important area.

Younes CHIBA is currently an associate Professor on Mechanical Engineering Department, Faculty of Technology, University of Médéa,  Algeria since 2006. He specializes in Clean energy and Materials. He received his M.Sc. in HVAC systems from Constantine University, Algeria in 2005, and his PhD in Mechanical Engineering from the National Polytechnic School, Algiers in collaboration with the  university of Western Switzerland from 2011, 2012 and 2013. He is the supervisor of many PhD thesis and masters in Algeria. Recently, he is reviewer in certain prestigious international journal. He has published more than 50 papers and his research interests include the renewables energies, energy conversion and magnetocaloric materials.

Abdelhalim Tlemçani received the B.Sc. and M.Sc. degrees in power electronics and the Ph.D. degree in electrical engineering from the National Polytechnic School of Algiers, Algeria, in 1997, 1999 and 2007, respectively. In 2002, he was a Lecturer and Researcher with the Department of Electrical Engineering, Université Docteur Yahia Farès de Médéa, Médéa, Algeria, where he is currently Professor. He is the Director of the Control and Power Electronics Research Group. His research interests include power electronics, electrical drives, robust and nonlinear control, and fuzzy systems.

Arezki Smaili is a full professor of Mechanical Engineering and Director of Research Laboratory of Mechanical Engineering and Development (Laboratoire de Génie Mécanique et Développement, LGMD), at National Polytechnic School-ENP, Algiers, Algeria. He received his M.Sc. in Mechanical Engineering from Laval University, Québec (Canada) in 1991, and his PhD in Energy Sciences from Université du Québec (Canada) in 1998. He joined the ENP in 2006. He was formerly research scientist in the Wind Energy Laboratory at Ecole de technologie supérieure, Montreal (Canada). He has been involved with wide range of energy conversion applications, particularly in the area of thermal analysis of renewable energy systems and aerodynamics of wind turbines since the 1992.  He has supervised more than 10 PhD theses and his research has produced more than 100 technical papers published in international journals and proceedings.