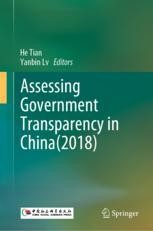 Covering the country as a whole, the general report summarizes significant aspects of openness in government affairs at all levels regarding, e.g. decision-making, law enforcement, management, service, policy interpretation and responding to public concerns. In addition, the general report reveals some current problems and provides an outline of openness in government affairs for the future.

Focusing on decision-making, social assistance, environmental protection, transport, education and other fields closely related to public interest and social attention, the book subsequently summarizes a number of special works concerning openness in government affairs. Furthermore, it conducts a special study on the standardized work of openness in government affairs, which has been actively pursued by departments of the State Council and local governments.

In order to provide representative coverage on openness in government affairs, the book combines innovative measures, experiences and problems, while also sharing an in-depth analysis of the difficulties involved in openness for local governments, including examples from several provinces and cities.

He Tian is Director of Rule of Law Index, CASS, Researcher of Institute of Law, CASS, Principal Researcher of the rule of law index innovation project, Editor-in-Chief of Blue Book of Rule of Law, Member of the Information Technology Expert Advisory Committee of the Supreme People's Court and Special Advisory Expert of the Supreme People's Court. Her main research fields are criminal rule of law, positive jurisprudence and judicial system.