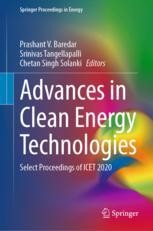 This book presents select proceedings of the international conference on Innovations in Clean Energy Technologies (ICET 2020) and examines a range of durable, energy efficient and next-generation smart green technologies for sustainable future by reflecting on the trends, advances and development taking place all across the globe. The topics covered include smart technologies based product, energy efficient systems, solar and wind energy, carbon sequestration, green transportation, green buildings, energy material, biomass energy, smart cites, hydro power, bio-energy and fuel cell. The book also discusses various performance attributes of these clean energy technologies and their workability and carbon footprint. The book will be a valuable reference for beginners, researchers and professionals interested in clean energy technologies.

Dr. Prashant V. Baredar besides being the Chairman and Professor at the Department of Energy -Energy Centre MANIT, Bhopal, is also an educator, innovator, researcher, and author. He did his PhD in Thermal Engineering, Integrated Energy System. He has successfully led 8 projects which involves sensitivity analysis and optimization of hybrid system of solar, wind and biomass’ and evaluated downdraft gasifier in RGPV Campus using different biomass briquettes for electricity generation for Madhya Pradesh Council of Science and Technology MPCST. He carried out electricity generation project entirely based on captivating wind power for Ministry of New and Renewable Energy (MNRE). His constant and unfailing devotion earned him best faculty award in 2010 by honorable Chairman BOG and Best Researcher award in 2017 by CRS Education Expo NCR Noida. He has also published over 100 research papers in reputed international and national journals and conferences; authored 5 books and 3 books chapter on mechanical engineering, biodiesel and renewable energy resources. He also has 2 patents to his credit. He has also guided 43 MTech Theses and 8 PhD theses so far. He has done several sponsored and consultancy projects in energy sector for Madhya Pradesh Urja Vikas Nigam, NHDC and Municipal Corporation.

Dr. T. Srinivas besides being an Associate Professor at Department of Mechanical Engineering in Dr. BR Ambedkar NIT Jalandhar, is also an educator, researcher and author. He received his PhD from JNT University College of Engineering, Hyderabad, in 2008 and was a Postdoctoral fellow at University of Ontario Institute of Technology (UOIT), Canada, in 2010 and 2013. He has completed various research projects funded by CSIR, SERB and NSERC. He has 4 patents and one copyright to his credit. He has authored 3 books, 10 book chapters, 100 journal publications, and 85 conference proceedings. His current areas of research are solar poly-generation, combined power and cooling systems, Kalina power systems, combined cycle power generation and solar-biomass hybrid systems. He has given 60 invited lectures and has supervised 5 PhD students, 29 MTech thesis and 35 UGC projects. He also has an industrial experience of 3 years and 9 months in a machine tool company.

Dr. Chetan Singh Solanki, besides being a Professor at the Department of Energy Science and Engineering, IIT Bombay, is also an educator, innovator, researcher, entrepreneur, author and philosopher.  He received his PhD from IMEC (Ketholik University) Leuven, Belgium, a leading R&D and innovation hub in micro and nano-electronics. Dr. Solanki has done remarkable work in the solar sector and being one of the Principal Investigators at The National Center for Photovoltaic Research and Education (NCPRE) is currently leading two projects of national importance on the dissemination of affordable solar technology. This project aims to provide R&D and education support for India’s ambitious 100 GW solar mission. He also fathers the Solar Urja through Localization for Sustainability (SoULS) project at IIT Bombay, which aims to provide solar study lamp to every child in rural India as part of its ‘Right to Light’ mission. He has also won the European Material Research Society’s young scientist award in 2003 and IIT Bombay’s Young Investigator Award in 2009. He has published over 100 research papers in reputed international journals, authored 4 books on solar and renewable energy and received first prize from the Ministry of New and Renewable Energy (MNRE), Govt. of India in 2011 for his book, ‘Renewable Energy Technologies—A Practical Guide for Beginners’ (Hindi). He also has 4 US patents to his credit. Being an active member of several national committees related to Solar Technology he still finds time to practice yoga, breathing exercises and meditation for physical and mental well-being and promotes “being happy under all situations”.