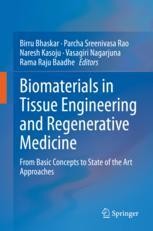 From Basic Concepts to State of the Art Approaches

Dr. Birru Bhaskar works at Prof Brien Holden Eye Research Centre, LV Prasad Eye Institute, Hyderabad, India. Previously he had worked at the Indian Institute of Technology, Guwahati, towards the development of novel biomaterials. He has completed his graduation in Biotechnology from the National Institute of Technology Warangal, India, where he has developed novel biomaterials & bioreactors for tissue engineering. He was a Newton Bhabha fellow and he had also undertaken a sabbatical in the ‘Department of Materials science and Engineering’ at ‘The University of Sheffield’. His thrust area of research is Biomaterials and Tissue engineering. He has several publications to his credit.

Dr. P. Sreenivasa Rao is an Associate Professor at the Department of Biotechnology, National Institute of Technology, Warangal. He was bestowed as Associate Fellow by Telangana Academy of Sciences and honored with ‘Established Scientist Award’ by Scientific Planet Society. Earlier, he has served as the Head of the Department of Biotechnology at the National Institute of Technology, Warangal. His research group works toward the development of biomaterial scaffolds that can be utilized in tissue engineering. He is entrusted as a scientific advisor to various Biotech industries includes Syngene, Lonza International, ATGC International Gland Pharma, Vcare Biolabs, and BVTL Pvt Ltd. He is a reviewer and editorial board member of renowned international journals. He has a patent to his credit and has published more than 40 research articles in journals of international repute and has also authored 5 book chapters.

Dr. Naresh Kasoju is a Scientist at the Department of Bio-Medical Technology (BMT) Sree Chitra Tirunal Institute for Medical Sciences and Technology (SCTIMST), Thiruvananthapuram, India. He has earlier obtained his Ph.D. from the Indian Institute of Technology, Guwahati, India (2012) and post-doctoral training from the Institute of Macromolecular Chemistry, Prague, Czech Republic and University of Oxford, Oxford, United Kingdom (2012-2017). His research areas are focused on developing novel biomaterial structures, unraveling molecular organization in polymeric biomaterials, and understanding cell-material interactions at the molecular level. Till now, he has published more than 40 research articles and is associated with many international journals as a reviewer, guest editor, and editorial board member. He is a member of the prestigious National Academy of Sciences, India and Royal Society of Biology, United Kingdom.

Nagarjuna V is an alumnus of UOH and is a member of various scientific organizations (SBCI, ISCA, etc). He has worked as a Scientist at the NIAB, Hyderabad and as a research fellow at CCMB (CRF-NIMS) Medical Biotechnology Centre & NITW. His research interests are in cellular and molecular pathobiology, chemical biology, cancer biology, stem cells, and regenerative medicine. His research contributions include pioneering work on mitochondrial-targeted curcumin, which is highly acclaimed and cited.

Dr. Rama Raju Baadhe is an Assistant Professor at the Department of Biotechnology, National Institute of Technology, Warangal. He has been honored with various awards, including the Young Scientist award from Telangana Academy of Sciences (2016), Scientific Planet Society (2015), K V Rao Scientific Society Hyderabad (2013). He is bestowed as an Associate Fellow of Telangana Academy of Sciences (TAS) in 2015. His research is focused on the development of natural biomaterial which can be utilized in tissue engineering through the biorefinery concept. He is serving as an editorial member of Journal of Enzymology and Metabolism. He has published more than 20 research articles in peer-reviewed international journals and has authored 10 book chapters.