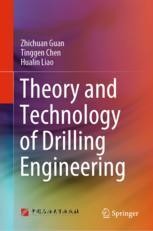 Theory and Technology of Drilling Engineering

This book presents the theory and technologies of drilling operations. It covers the gamut of formulas and calculations for petroleum engineers that have been compiled over several years. Some of these formulas and calculations have been used for decades, while others help guide engineers through some of the industry’s more recent technological breakthroughs. Comprehensively discussing all aspects of drilling technologies, and providing abundant figures, illustrations and tables, examples and exercises to facilitate the learning process, it is a valuable resource for students, scholars and engineers in the field of petroleum engineering.

Zhichuan Guan, Professor, born in March 1959, is a doctoral supervisor, a famous teacher of the National Ten Thousand People’s Plan, an expert on special allowances from the State Council, a model teacher of the whole country, an academic leader of the National Key Discipline of Oil and Gas Well Engineering, a leader of the national teaching team of petroleum engineering, and a specialist in petroleum engineering. He is the head in charge of the course of drilling engineering with the national excellent quality. He has been engaged in teaching and scientific research in the field of petroleum engineering for more than 30 years. He has lectured on drilling engineering and fluid mechanics of oil and gas wells. He has undertaken many national projects such as the National 973 Project, the 863 Projects and the National Natural Science Foundation of China. He has won one second prize for national scientific and technological progress, one first prize for provincial and ministerial scientific and technological progress, and one first prize for scientific and technological progress. He won 3 second-class prizes, 1 second-class prize for national teaching achievements, 2 first-class prizes for provincial and ministerial teaching achievements, 1 first-class prize and 2 second-class prizes, more than 30 patents for invention, and published 3 textbooks and monographs, and more than 200 papers, and is the editor of the Journal of Petroleum Drilling Technology.

Tinggen Chen, Professor, born in December 1932, doctoral supervisor, graduated from the Department of Petroleum Engineering, Tsinghua University in 1953. He was the director of the drilling Department and the head of the Department of Oil and Gas Development. He published a number of monographs and textbooks concerned with drilling engineering, rock breaking principles and tools, and others. He has given lectures on “Drilling Technology Principles” and “Optimized Drilling” and other courses, won a national prize for scientific and technological progress, published more than 20 journal papers, and was awarded as a model worker in China national education system.

Hualin Liao, Professor, doctoral supervisor, was born in August 1974. He graduated from Jianghan Petroleum Institute in 1996, obtained a master’s degree in oil and gas well engineering from the University of Petroleum (East China) in 2000. He worked in Shengli Oilfield Bohai Drilling Corporation from July 1996 to August 2001. He obtained a master’s degree from the University of Petroleum (East China) in 2001 and a doctoral degree in January 2005. From March 2012 to February 2013, he was a visiting scholar at Colorado Mining University. Now, he is the deputy dean of School of Petroleum Engineering, mainly undertakes the teaching work undergraduate and postgraduate students such as Drilling Engineering, Advanced Well Completion Engineering and so on. Since 2013, he has given above courses in English for about 50 international students in two classes every semester. Also, he is engaged in petroleum engineering wells mechanics, information and control, and oil and gas well fluid mechanics and engineering research. He has completed more than 30 projects as PI and co-PI, formed an academic research focus on well drilling engineering optimization design, engineering risk assessment and methods on improving rate of penetration. The research achievements were awarded 5 provincial and ministerial level scientific and technological progress awards. In 2017, he was awarded the outstanding teachers of University.