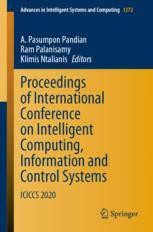 This book is a collection of papers presented at the International Conference on Intelligent Computing, Information and Control Systems (ICICCS 2020). It encompasses various research works that help to develop and advance the next-generation intelligent computing and control systems. The book integrates the computational intelligence and intelligent control systems to provide a powerful methodology for a wide range of data analytics issues in industries and societal applications. The book also presents the new algorithms and methodologies for promoting advances in common intelligent computing and control methodologies including evolutionary computation, artificial life, virtual infrastructures, fuzzy logic, artificial immune systems, neural networks and various neuro-hybrid methodologies. This book is pragmatic for researchers, academicians and students dealing with mathematically intransigent problems.

Pasumpon Pandian Arasu received his Ph.D. degree in the Faculty of Information and Communication Engineering under Anna University, Chennai, TN, India in 2013. He received his graduation and postgraduation degree in Computer Science and Engineering from PSG College of Technology, Coimbatore, TN, India, in the year 1993 and 2006, respectively. He is currently working as Professor in the Computer Science and Engineering Department of KGiSL Institute of Technology, Coimbatore, TN, India. He has twenty-six years of experience in teaching, research and IT industry. He has published more than 20 research articles in refereed journals. He acted as a Conference Chair in IEEE and Springer conferences and Guest Editor in computers and electrical engineering (Elsevier), soft computing (Springer) and International Journal of Intelligent Enterprise (Inderscience) Journals. His research interest includes image processing and coding, image fusion, soft computing and swarm intelligence.
Prof. Ram Palanisamy is a Professor of Enterprise Systems in the Business Administration Department at the Gerald Schwartz School of Business, St. Francis Xavier University. Dr. Palanisamy teaches courses on Foundations of Business Information Technology, Enterprise Systems using SAP, Systems Analysis and Design, SAP Implementation, Database Management Systems, and Electronic Business (Mobile Commerce). Before joining StFX, he taught courses in Management at the Wayne State University (Detroit, USA), Universiti Telekom (Malaysia) and National Institute of Technology (NITT), Deemed University, India. His research interest includes enterprise systems (ES) implementation; ES acquisition; ES flexibility,; ES success; knowledge management systems; healthcare inter-professional collaboration.
Prof. Klimis Ntalianis received his diploma and Ph.D. degrees both from the Electrical and Computer Engineering Department of the National Technical University of Athens (NTUA) in 1998 and 2003, respectively. Between 2004 and 2006, he has written two postdoctoral theses in the areas of multimedia protection and emotion analysis. From 1998 to 2009, he was a Senior Researcher and Projects Coordinator at the Image, Video and Multimedia Lab of NTUA. During this period, Dr. Ntalianis has participated in the writing, submission and implementation of more than 20 R&D proposals in calls for proposals of the General Secretariat of Research and Technology (GSRT) of Greece (Frameworks: EPEAEK, PABE, EPET, PENED), the Research Promotion Foundation of Cyprus, Information Society S.A. and the European Union (Frameworks: ESPRIT, TMR, IST, Leonardo, FP6 and FP7). In parallel and from 2005 to 2011, he has worked as an Adjunct Lecturer at the University of Peloponnese, the Hellenic Naval Academy, the Hellenic Air Force and the Cyprus University of Technology. Except of his academic activities, Dr. Ntalianis has also worked for the Institute of Communication and Computer Systems (NTUA), Algosystems S.A., Kleidarithmos Publications, Municipality of Egaleo and Informatics and Telematics Institute, Center for Research and Technology Hellas. Additionally, he has served as evaluator of the committee 48/2000 of ASEP for employing staff in the public sector (2000), he was the main writer of horizontal research studies for GSRT's Call 65 (55 MEuro) of the Information Society Programme (2003-2005 and 2008), he has evaluated the competition of The Hellenic Literary and Historical Archive (500 KEuro, 2005), and he has carried out 25 expert consultancies on behalf of Information Society S.A., for 25 proposals of 19 organizations, in the framework of Call 65. He has also worked as an expert evaluator for the Research Promotion Foundation of Cyprus in the framework of the programme “Research for Companies – Product” (February–March 2010) and for the GSRT in the framework of the Action “Collaboration” (March 2010). He was also a regular member of the No. 1 Evaluation Committee of the Ministry of Education for evaluating proposals in the framework of the call «Support of Small and Medium Companies for Research and Development Activities (11 MEuro, 2010–2012). Dr. Ntalianis is an active reviewer of more than 10 International Journals of ΙΕΕΕ, Springer, Elsevier, etc. Additionally, he is an active reviewer and/or participates in the organizing committees of more than 10 International Conferences of ΙΕΕΕ, ΑCM, etc. From April 2015, he is an Associate Professor at the West Attica University (Department of Marketing, Specialization: “Multimedia over the Internet”). Dr. Ntalianis has participated as Editor in the proceedings of 3 international conferences, he has translated and was responsible for the scientific redaction of two Computer Science books (Kleidarithmos Publications), and he has written more than 150 scientific papers & deliverables and has received more than 650 citations. His main research interests include multimedia processing, social media analysis, crowdsourcing and data mining.