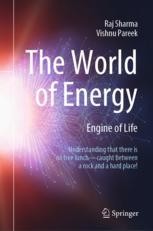 The World of Energy

This book analyzes the entire spectrum of energy, from conventional sources to various alternative sources. Historically, the Sun has been viewed as the ultimate source of energy on the Earth. All forms of energy – fossil fuels and renewables alike – owe their existence to the Sun. The book also provides a historical perspective on energy policy over the years. It explains the fundamentals of energy and all related aspects using clear and straightforward language, and will serve as a reference guide for all stakeholders including policymakers, academics, students and world citizens in general.

Show all
About the authors
Prof. Raj Sharma is currently an Adjunct Professor at Curtin University’s WA School of Mines: Minerals, Energy and Chemical Engineering. He was educated in India, England and the United States. He earned his BS, MS and PhD (1980) degrees from the Colorado School of Mines, USA, in Chemical and Petroleum Refining Engineering. Before commencing his academic career at the Indian Institute of Technology Kanpur in 1982, Prof Sharma served with Tosco Corporation in USA as a Senior Research Engineer. Subsequently, he was appointed as the Founding Head of Department at Malviya National Institute of Technology Jaipur in 1989, where he served until 1999. Since then, he has held senior positions with multiple academic and industrial organizations such as the University of Natal, Durban, SA, University of Mauritius, Mauritius, Columbia University, New York, National Technology Enterprises Company (NTEC,) Kuwait. Prof Sharma has expertise across multiple area of Chemical Engineering with special interest in  energy; and, education. He is an inspiring lecturer and a visionary academic. Focus of his teaching is not just to produce engineers but leaders, which has seen his students widely excelling in their chosen fields.Prof. Vishnu Pareek is currently serving as Head of the WA School of Mines: Minerals, Energy and Chemical Engineering, and as Dean of Engineering at Curtin University. Prior to this, he was Head of the School of Chemical and Petroleum Engineering (2015–2018) and Head of the Department for Chemical Engineering (2012–2014). He holds a Ph.D. from the University of New South Wales, an M.Tech. from the IIT Delhi and a B.E. (Hons.) from the University of Rajasthan Jaipur, all in Chemical Engineering.  Prof. Pareek’s expertise lies in process simulations and design, with a particular emphasis on applying these tools to industrial-scale problems. He has conducted extensive applied research/consultancy for several multinational companies such as Chevron, Woodside and BP. Recently, his interests have primarily focused on reducing energy consumption in oil and gas operations. In 2019, he was awarded Curtin University’s highest academic title of John Curtin Distinguished Professor for his contributions to research and academic leadership.