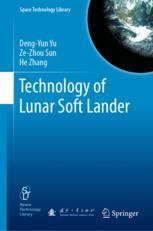 This book provides systematic descriptions of design methods, typical techniques, and validation methods for lunar soft landers, covering their environmental design, system design, sub-system design, assembly, testing and ground test validation based on the Chang’e-3 mission. Offering readers a comprehensive, systematic and in-depth introduction to the technologies used in China’s lunar soft landers, it presents detailed information on the design process for Chang’e-3, including methods and techniques that will be invaluable in future extraterrestrial soft lander design. As such, the book offers a unique reference guide for all researchers and professionals working on deep-space missions around the globe.

Dengyun Yu, deputy director of the China Aerospace Science and Technology Corporation CST. He has long been engaged in systematic designing of spacecraft, theoretical research of dynamic, development of analysis software, and related organization and management work. He has participated in, or organized the analysis and research about the impact dynamic of spacecraft, the vibration mechanics of remote sensing satellite, the dynamic of manned spacecraft docking in space, the complex dynamic of space station and so on, where he achieved substantial achievements. He has published more than 50 articles at peer-reviewed academic journals and conferences.

Zezhou Sun, Chief Designer of Mars exploration project. He has long been engaged in research works on Chinese lunar exploration projects, where he has accumulated a wealth of professional and technical experience. He was the deputy designer of Chang’e-1 (CE-1) and the Chief Designer of Chang’e-3 (CE-3). He has designed the first Chinese tracking telemetry and command system for deep space exploration, which solved the design problem of long-distance monitoring and control communication of 380,000 km of lunar exploration satellite. This ensures the success of the first lunar orbit detection mission in China. His team has completed the Chinese first lunar soft landing and inspection mission successfully for CE-3. He has won the National Science and Technology Progress Award, 1 time special award, 1 time the second class prize and 1 time the third class prize of the National Defense Science and Technology Award.

He Zhang, the Chief Designer of CE-4. She has long been engaged in research work on Chinese lunar exploration projects. When she was the deputy designer of CE-3, she led the team to complete the lunar special environment research, mission planning, and the system design of the lunar lander, which ensured the success of the lunar soft lander - CE-3. She has won 2 times the second class prize of the National Defense Science and Technology Progress Award, the honorary title of "outstanding contributions of CE-3 of lunar exploration project" and so on.