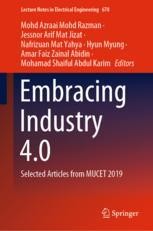 This book highlights selected articles from the electrical engineering track, with a focus on the latest trends in electrical and electronic engineering toward embracing Industry 4.0, as part of the Malaysian Technical Universities Conference on Engineering and Technology—MUCET 2019. The event brings together researchers and professionals in the fields of engineering, research, and technology, and provides a platform for future collaborations and exchanges.