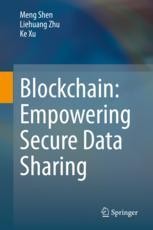 With the development of big data, data sharing has become increasingly popular and important in optimizing resource allocation and improving information utilization. However, the expansion of data sharing means there is an urgent need to address the issue of the privacy protection – an area where the emerging blockchain technology offers considerable advantages. Although there are a large number of research papers on data sharing modeling and analysis of network security, there are few books dedicated to blockchain-based secure data sharing.

Filing this gap in the literature, the book proposes a new data-sharing model based on the blockchain system, which is being increasingly used in medical and credit reporting contexts. It describes in detail various aspects of the model, including its role, transaction structure design, secure multi-party computing and homomorphic encryption services, and incentive mechanisms, and presents corresponding case studies.

The book explains the security architecture model and the practice of building data sharing from the blockchain infrastructure, allowing readers to understand the importance of data sharing security based on the blockchain framework, as well as the threats to security and privacy. Further, by presenting specific data sharing case studies, it offers insights into solving data security sharing problems in more practical fields. The book is intended for readers with a basic understanding of the blockchain infrastructure, consensus mechanisms, smart contracts, secure multiparty computing, homomorphic encryption and image retrieval technologies.

Meng Shen is an Associate Professor at the School of Computer Science, Beijing Institute of Technology, China. He received his Ph.D. degree from the Department of Computer Science and Technology at Tsinghua University, Beijing, China. His research interests include blockchain applications, data privacy, machine learning security, and cloud security. He has authored over 50 papers in top-level journals and conferences, such as ACM SIGCOMM, IEEE JSAC, and IEEE TIFS. He has guest edited special issues on emerging technologies for data security and privacy in IEEE Network and IEEE Internet-of-Things Journal. He received the Best Paper Runner-Up Award at IEEE IPCCC 2014. He is a member of IEEE and ACM.

Liehuang Zhu is a full Professor at the School of Computer Science, Beijing Institute of Technology. He has been selected into the P.R. China Ministry of Education Program for New Century Excellent Talents in University. His research interests include Internet of Things, cloud computing security, and Internet and mobile security. He has published over 60 SCI-indexed research papers in these areas, as well as a book with Springer. He serves on the editorial boards of three international journals: IEEE Internet-of-Things Journal, IEEE Network, and IEEE Transactions on Vehicular Technology. He won the Best Paper Award at IEEE/ACM IWQoS 2017 and IEEE TrustCom 2018.

Ke Xu holds a Ph.D. from the Department of Computer Science & Technology at Tsinghua University, Beijing, China, where he serves as a Full Professor. He has published more than 200 technical papers and holds 11 US patents in the areas of next-generation Internet, blockchain systems, Internet of Things (IoT), and network security. He is a member of the ACM and senior member of the IEEE. He has guest edited several special issues of IEEE and Springer journals, and he also published the book ‘Internet Resource Pricing Models’ with Springer in 2013. He serves as an editor of the IEEE IoT Journal and chairs the IEEE/ACM IWQoS steering committee (2018-2021).