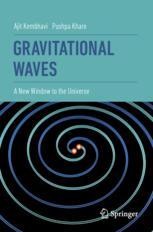 A New Window to the Universe

Gravitational waves were first predicted by Albert Einstein in 1916, a year after the development of his new theory of gravitation known as the general theory of relativity. This theory established gravitation as the curvature of space-time produced by matter and energy. To be discernible even to the most sensitive instruments on Earth, the waves have to be produced by immensely massive objects like black holes and neutron stars which are rotating around each other, or in the extreme situations which prevail in the very early ages of the Universe.  This book presents the story of the prediction of gravitational waves by Albert Einstein, the early attempts to detect the waves, the development of the LIGO detector, the first detection in 2016, the subsequent detections and their implications. All concepts are described in some detail, without the use of any mathematics and advanced physics which are needed for a full understanding of the subject. The book also contains description of electromagnetism, Einstein’s special theory and general theory of relativity, white dwarfs, neutron stars and black holes and other concepts which are needed for understanding gravitational waves and their effects. Also described are the LIGO detectors and the cutting edge technology that goes into building them, and the extremely accurate measurements that are needed to detect gravitational waves. The book covers these ideas in a simple and lucid fashion which should be accessible to all interested readers. The first detection of gravitational waves was given a lot of space in the print and electronic media. So, the curiosity of the non-technical audience has been aroused about what gravitational waves really are and why they are so important. This book seeks to answer such questions.

Ajit Kembhavi is Professor Emeritus and was a Raja Ramanna Fellow at the Inter-University Centre for Astronomy and Astrophysics (IUCAA), Pune.  He was Director there until August 2015.  He did his Ph.D. from TIFR, Mumbai, and was a post-doctoral fellow at the Institute of Astronomy, Cambridge. Professor Kembhavi is a distinguished astronomer who works on galaxies, quasars and other extragalactic objects, various areas of high energy astrophysics, X-ray and radio pulsars.  He has published a large number of research papers and several books. Professor Kembhavi has been a member of the Space Commission and is presently a member of the ISRO’s Apex Science Board. He is Vice-President of the International Astronomical Union and former President, Astronomical Society of India. He was Chair of the International Virtual Observatory Alliance, Chair of the Scientific Council of the Astronomical Data Centre at Strasbourg and Chair of the Council of the Indian Institute of Astrophysics. He is a Fellow of the Indian Academy of Sciences and the National Academy of Sciences, India. He can be contacted at akk@iucaa.in

Pushpa Khare is M.Sc. (Physics), gold medalist, from Indore University. She did her Ph.D. in Astrophysics from the Tata Institute of Fundamental Research, Mumbai, and her postdoctoral work at the Max Planck Institute for Astronomy at Munich, Germany, and at the University of Manchester, UK.  She then joined as professor of Physics at the Utkal University, Bhubaneswar, Odisha, in 1983. After retiring from there in 2010, she was CSIR Emeritus Fellow at the Inter-University Centre for Astronomy and Astrophysics (IUCAA), Pune, for four years. She had been an associate of IUCAA, since its inception in 1990 till her retirement. She has mainly worked on the interstellar medium, quasar absorption lines and gravitational lensing, and has published more than 50 research papers in international peer-reviewed journals. She has been a visiting professor at several universities around the world including University of Illinois at Chicago, University of South Carolina, University of Chicago, University of Osaka, etc. She has presented her work in several national as well as international conferences including those at Shanghai, Kunming, Chicago, Columbia and Marseilles. She can be contacted at pushpakhare@gmail.com
Show all