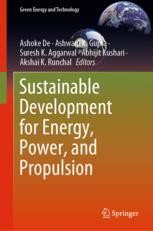 This book comprises state-of-the-art advances in energy, combustion, power, propulsion, environment, focusing on the production and utilization of fossil fuels, alternative fuels and biofuels. It is written by internationally renowned experts who provide the latest fundamental and applied research innovations on cleaner energy production as well as utilization for a wide range of devices extending from micro scale energy conversion to hypersonic propulsion using hydrocarbon fuels. The tailored technical tracks and contributions are portrayed in the respective field to highlight different but complementary views on fuels, combustion, power and propulsion and air toxins with special focus on current and future R&D needs and activities. This book will serve as a useful reference for practicing engineers, research engineers and managers in industry and research labs, academic institutions, graduate students, and final year undergraduate students in mechanical, chemical, aerospace, energy, and environmental engineering.

​Ashoke De is an Associate Professor at the Department of Aerospace Engineering, Indian Institute of Technology Kanpur. He has been the recipient of the Humboldt Research fellowship for Experienced Researchers, IEI-Young Engineer’s Award-2014, DST Young Scientist award-2015, and P K Kelkar Research Fellowship from IIT Kanpur. He is a member of ASME, SIAM, FMFP, ISHMT and Combustion Institute. He received his MS from IIT Kanpur, and PhD from Louisiana State University. He has authored over 90 peer reviewed papers. His research interests include combustion modeling, hybrid RANS/LES model development, supersonic flows and Fluid-Structure interactions (FSI) with focus on computational mechanics in combustion and turbulent flows.

Suresh Aggarwal received his Ph.D. from Georgia Institute of Technology. He was a member of research staff at Princeton University and Senior Research Engineer at CMU. He then joined the University of Illinois at Chicago was promoted to Professor in 1995. He served as Director of Graduate Studies, and was also Visiting Scientist at ANL, Visiting Professor at Ecole Centrale-Paris, France and Guest Professor at Jiangsu University, China. His research interests include combustion, multiphase reacting flows, emissions, clean energy, and fire suppression. He has authored over 360 publications and is a Fellow of ASME, AAAS and Associate Fellow of AIAA.

Abhijit Kushari is a Professor at the Department of Aerospace Engineering, Indian Institute of Technology Kanpur. Dr. Kushari received his PhD from Georgia Institute of Technology, in 2000 and joined the IIT Kanpur as an Assistant Professor in 2001. He became a Professor in 2014. His research interests are aerospace propulsion, gas turbine engines, turbo-machinery, liquid atomization flow control and combustion dynamics. He has authored more than 130 technical papers.

Akshai K. Runchal is the founder and Director of CFD Virtual Reality Institute and ACRI group of companies. His expertise is in Computational Fluid Dynamics (CFD). He has consulted widely on flow, heat and mass transfer, combustion, environmental impact, hazardous and nuclear waste, ground water and decision analysis to over 200 clients in 20 countries. He is the principal author of PORFLOW®, TIDAL®, ANSWER® and RADM™ simulation models that are used worldwide. He received his PhD from Imperial College (London), and Bachelor's in Engineering from PEC.  He has taught in the USA, India and the UK.  He has authored 7 books and over 200 technical publications. He has received many honors and awards, and given many invited contributions at conferences.