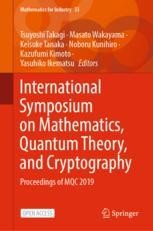 This open access book presents selected papers from International Symposium on Mathematics, Quantum Theory, and Cryptography (MQC), which was held on September 25-27, 2019 in Fukuoka, Japan. The international symposium MQC addresses the mathematics and quantum theory underlying secure modeling of the post quantum cryptography including e.g. mathematical study of the light-matter interaction models as well as quantum computing.
The security of the most widely used RSA cryptosystem is based on the difficulty of factoring large integers. However, in 1994 Shor proposed a quantum polynomial time algorithm for factoring integers, and the RSA cryptosystem is no longer secure in the quantum computing model. This vulnerability has prompted research into post-quantum cryptography using alternative mathematical problems that are secure in the era of quantum computers. In this regard, the National Institute of Standards and Technology (NIST) began to standardize post-quantum cryptography in 2016.
This book is suitable for postgraduate students in mathematics and computer science, as well as for experts in industry working on post-quantum cryptography.

Prof. Wakayama is a Professor of Mathematics, Vice President at Tokyo University of Science (TUS) and Principal Fellow at Center for Research and Development Strategy, Japan Science and Technology Agency (CRDS/JST). He is also Professor Emeritus at Kyushu University. He obtained Ph.D. from Hiroshima University in 1985. His research interests include Representation Theory, Number Theory and Mathematical Physics, and has published over 100 referred research papers. He has contributed his experience and expertise to both academic works and university administration. His current appointments include Chair of Asia Pacific Consortium of Mathematics for Industry (2014-). He is the Editor-in-Chief of the Springer series “Mathematics for Industry”.

Prof. Takagi received his B.Sc. and M.Sc. degrees in mathematics from Nagoya University in 1993 and 1995, respectively. He was engaged in research on network security at NTT Laboratories from 1995 to 2001. He received his Ph.D. from Technical University of Darmstadt in 2001. He is currently a Professor in the Graduate School of Information Science and Technology at University of Tokyo. His current research interests are information security and cryptography. He received DOCOMO Mobile Science Award in 2013, IEICE Achievement Award in 2013, and JSPS Prize in 2014. Dr. Takagi was a Program Chair of the 7th International Conference on Post-Quantum Cryptography, PQCrypto 2016.

Prof. Tanaka is a Professor in the School of Computing at Tokyo Institute of Technology. He received his B.S. from Yamanashi University in 1992, and his M.S. and Ph.D. in Computer Science from Japan Advanced Institute of Science and Technology in 1994 and 1997, respectively. Before joining Tokyo Institute of Technology, he was Research Engineer at NTT Information Platform Laboratories. His research interests include theory of cryptography, cryptocurrency and blockchain technology, and cybersecurity.