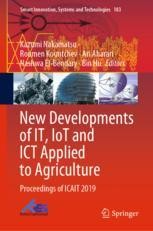 New Developments of IT, IoT and ICT Applied to Agriculture

Kazumi Nakamatsu received the Ms. Eng. and Dr. Sci. from Shizuoka University, 1976 and Kyushu University, Japan, 1999, respectively. He is a full Professor at School of Human Science and Environment, University of Hyogo, Japan. His research interests encompass various kinds of logic and their applications to Computer Science, especially paraconsistent annotated logic programs and their applications. He is an author of over 150 journal papers, book chapters and conference papers, and edited 14 books published by prominent publishers such as Springer-Verlag. He has chaired various international conferences, workshops and invited sessions, and he has been a member of numerous international program committees of workshops and conferences in the area of Artificial Intelligence and Computer Science. He serves as the Founding-Editor and Editor-in-Chief of the International Journal of Reasoning-based Intelligent Systems by Inderscience Publishers (UK), and an editorial board member of many international journals. He has contributed numerous invited lectures at international workshops, conferences, and academic organizations. He also is a recipient of some conference and paper awards. He is a member of Japan AI Society, etc.
Prof. Dr. Roumen Kountchev, D.Sc. is with the Faculty of Telecommunications, Dept. of Radio Communications and Video Technologies - Technical University of Sofia, Bulgaria. He has 341 papers published in magazines and conference proceedings, 15 books, 46 book chapters; 20 patents. A member of Euro Mediterranean Academy of Arts and Sciences; President of Bulgarian Association for Pattern Recognition (member of IAPR); Editorial board member of IJBST Journal Group; Editorial board member of: Intern. J. of Reasoning-based Intelligent Systems; Intern. J. Broad Research in Artificial Intelligence and Neuroscience.

Assoc.Prof.Ari Aharari. He received M.E. and Ph.D. in Industrial Science and Technology Engineering and Robotics from Niigata University and Kyushu Institute of Technology, Japan, in 2004 and 2007, respectively. In 2004, he joined GMD-JAPAN as a Research Assistant. He was Research Scientist and Coordinator at FAIS- Robotics Development Support Office from 2004 to 2007. He was a Postdoctoral Research Fellow of the Japan Society for the Promotion of Science (JSPS) at Waseda University, Japan, from 2007 to 2008. He served as a Senior Researcher of Fukuoka IST involved in the Japan Cluster Project from 2008 to 2010. In 2010, he became an Assistant Professor at the Faculty of Informatics of Nagasaki Institute of Applied Science.Since 2012, he has been an Associate Professor at the Department of Computer and Information Science, SOJO University, Japan. His research interests are IoT, Robotics, IT Agriculture, Image Processing, and Data Analysis (Big Data) and their applications.
He is a member of the IEEE (Robotics and Automation Society), RSJ (Robotics Society of Japan), IEICE (Institute of Electronics, Information and Communication Engineers), IIEEJ (Institute of Image Electronics Engineers of Japan). Dr. Nashwa El-Bendary received her Ph.D. in information technology from the Faculty of Computers and Information, Cairo University, Egypt in 2008. From 2008 to 2015, she was an Assistant Professor with the College of Management and Technology and since 2016, she has been an Associate Professor with the College of Computing and Information Technology at the Arab Academy for Science, Technology, and Maritime Transport (AASTMT).Dr. El-Bendary is the author of many articles published in indexed international journals and conferences. She also participated in several international research projects. Her research interests include image and signal processing, machine learning, pattern recognition, and internet of things.Dr. El-Bendary is an IEEE Senior member and she was a recipient of the UNESCO-ALECSO Award for creativity and technical innovation for young researchers in 2014, and The L'Or'eal-UNESCO For Women in Science Fellowship in 2015. She co-organized and co-chaired various special sessions and has been invited as a speaker under the framework of several distinguished international conferences. She is also an editorial board member of several international indexed journals.
Bin Hu, engineer, a manager of CMCC, Hunan company, he is the co-founder of IRNet International Academic Communication Center (IRNet China), a special delegate of Interscience Research Network (IRNet), he is the guest editor of EI-indexed journals: International Journal of Reasoning-based Intelligent Systems (IJRIS) and International Journal of Information Systems and Supply Chain Management (IJISSCM), the editor board member of International Journal of Enterprise Information Systems (IJEIS) and International Journal of Strategic Decision Sciences (IJSDS) and the technical editor of International Journal of Computer & Communication Technology (IJCCT). Recently, he edited 2 special issues in IJISSCM and 2 special issues in IJRIS, he published many articles in high standard journals like Knowledge-based System(KS), Journal of Intelligent & Fuzzy Control (JIFS) ,Enterprise Information System(EIS) and etc