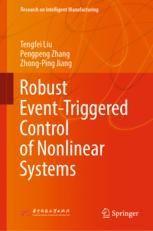 This book presents a study on the novel concept of "event-triggered control of nonlinear systems subject to disturbances", discussing the theory and practical applications. Richly illustrated, it is a valuable resource for researchers, engineers and graduate students in automation engineering who wish to learn the theories, technologies, and applications of event-triggered control of nonlinear systems.

Pengpeng Zhang received the B.E. degree in Electrical Engineering and Automation from the Ludong University, China, in 2014, and the M.E. degree in Control Theory and Control Engineering from Northeastern University, China, in 2016, where he is currently working toward the Ph.D. degree. His research interests include event-triggered control, nonlinear control and quantized control. P. Zhang with T. Liu and Z.P. Jiang, received the “IEEE CSS Beijing Chapter Young Author Prize” at the 2016 Chinese Control Conference.
Tengfei Liu received the B.E. degree in Automation and the M.E. degree in Control Theory and Control Engineering from South China University of Technology, in 2005 and 2007, respectively. He received the Ph.D. degree in Engineering from the Australian National University in 2011. From 2011 to 2013, Tengfei Liu was a visiting assistant professor at Polytechnic Institute of New York University (now Polytechnic School of Engineering at New York University). Since 2014, Tengfei Liu has been a professor with Northeastern University, China. His research interests include stability theory, robust nonlinear control, quantized control, distributed control and their applications in mechanical systems, power systems and transportation systems.Zhong-Ping Jiang received the B.Sc. degree in mathematics from the University of Wuhan, Wuhan, China, in 1988, the M.Sc. degree in statistics from the University of Paris XI, France, in 1989, and the Ph.D. degree in automatic control and mathematics from the Ecole des Mines de Paris, France, in 1993. He has been a Professor of Electrical and Computer Engineering at the Polytechnic School of Engineering, New York University. His main research interest is in stability and control for interconnected nonlinear systems, with special emphasis on applications to information, mechanical and biological systems. He is the author of over 160 journal papers and numerous conference papers in these areas. He has written two books: Stability and Stabilization of Nonlinear Systems (with Dr. I. Karafyllis, Springer, 2011) and Nonlinear Control of Dynamic Networks (with Drs. T. Liu and D.J. Hill, CRC Press, Taylor & Francis, 2014).