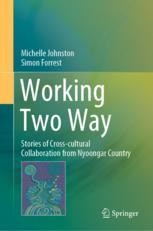 This book describes an action research approach to engaging respectfully with First Nations communities in a diverse range of contexts, disciplines and projects. It offers a valuable guide for professionals, students and teaching staff that recognises all participants as equal partners while acknowledging the diversity of First Peoples and culture, and prioritising local knowledge.

While the book is adaptable to a diverse range of cultures and disciplines, it is specifically focused on cross-cultural collaborative case studies in Noongar Country, which is located in the southwest of Western Australia. The case studies demonstrate how action research can be applied not only in the traditional areas of education and social justice, but also in a diverse range of disciplines, communities and circumstances, including media, education, environmental management and health. The book’s aim is to highlight successful cross-cultural First Nations community projects and to discuss each one in terms of its action research philosophy and process. In this regard, the voices of the participants are prioritised, especially those of First Nations communities.

While this book is specifically pitched at Australian readers, the action research approach described may be adapted and applied to many cross-cultural collaborative relationships, making it of interest and value to international students and researchers.

Michelle Johnston is a senior lecturer in screen arts at Curtin University in Perth. Her specialist areas of research include Aboriginal community and culture, action research, media representation, service learning, oral history and Aboriginal art. Michelle has a background in television production and is using that experience in her research and teaching where issues of media democracy and representation are a focus.

Michelle is passionate about engaging students with Aboriginal culture and community and has contributed to the development of a service-learning program at Curtin in which students work closely with Aboriginal community organisations to produce media projects. Action research is employed as a way of guiding students as they work with community partners and learn about Aboriginal history, culture and cultural protocols. This project was part of a national research project, led by Griffith University, that focused on arts-based service learning with Indigenous peoples.

Simon Forrest was born and raised in Wajuk country (Perth).  His mother is Nyungar and father Yamaji, Wongi.  He has connections to country at Goomalling (Balardong), Swan Valley (Wajuk), Mt Magnet (Badimaya) and Leonora (Wongutha). Simon is currently an Associate Professor at Curtin University in the role as Elder in Residence.  His professional background is an educator over 35 years in primary and university sectors.  He has also served in public service administrative roles in education and Aboriginal affairs, and has been the Head of Aboriginal Studies Centres at two Western Australian Universities.

Simon’s research and publications have mainly been in the area of Aboriginal Education,  more recenty concentrating on transformative learning, and the impact on student learning by teaching Aboriginal Studies university units On Country. His services are widely sought particularly as a presenter and facilitator in the areas of Aboriginal Education, History, Politics, Cultural Awareness and Competency.  In 2005 was awarded National Scholar of the Year at the National Aboriginal and Islander Day Observance Committee Awards.  In November 2015 he was Visiting Scholar at Colgate University, Hamilton, New York, USA.  He has also given seminars and taught at other universities in Australia, the United States and Germany.