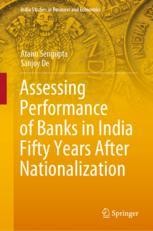 Assessing Performance of Banks in India Fifty Years After Nationalization

This book assesses the performance of banks in India over the past several decades, and discusses their current status after fifty years of nationalization. The performance of different categories of banks is evaluated by employing both the traditional ratio analysis and more sophisticated efficiency techniques. The book also explores the market conditions under which Indian banks operate. Going beyond a formal banking study, the book also investigates the causes of the widespread presence of informal credit in parallel to its formal banking counterpart. This approach makes it more comprehensive, unique and closer to the real world.
After 50 years of nationalization, India’s banking sector is at a crossroads, given the huge and unabated non-performing assets and talks of consolidation. This book, encompassing both the formal and the predominantly ‘trust-based’ informal credit system, provides essential insights for bankers and policymakers, which will be invaluable in their endeavours to implement meaningful changes. It may also spark new research in the fields of banking performance and efficiency analysis. Lastly, the book not only has significant implications for students of economics, banking, finance and management, but also offers an important resource to support training courses for banking personnel in India.

Dr Atanu Sengupta is a Professor at the Department of Economics, Burdwan University, West Bengal, India, where he has been teaching for more than a decade. He obtained his Ph.D. from the Economic Research Unit, Indian Statistical Institute (ISI), Kolkata. He has published over 45 papers in various refereed national and international journals such as Economic and Political Weekly, Sankhya, Social Indicators Research, International Journal of Education and Development, Indian Economic Review, Asia Pacific Development Journal, and Asia Pacific Journal of Education and Development, and has also contributed chapters in various edited volumes. He also published eight books, including two edited volumes. He is a regular reviewer for several reputed national and international journals. His areas of interest include econometrics, financial economics, development economics, microeconomics and growth theory.

Dr Sanjoy De is an Assistant Professor, Shyampur Siddheswari Mahavidyalaya, under the University of Calcutta, West Bengal, India. Previously, he served as Lead Analyst in Zacks Investment Research in Kolkata and as Senior Analyst at ICFAI University Press, Hyderabad, India. He obtained his Ph.D. in Economics from Burdwan University, Burdwan, West Bengal, India. At ICFAI, he was responsible for writing numerous articles on business, finance and economics. He has also published papers in Indian Economic Journal, Journal of Income and Wealth, Mainstream Weekly and others. His areas of interest include banking, microeconomics and statistics.