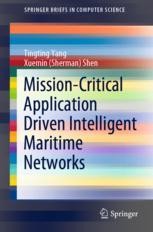 This book shares valuable insights into high-efficiency data transmission scheduling and into a group intelligent search and rescue approach for artificial intelligence (AI)-powered maritime networks. Its goal is to highlight major research directions and topics that are critical for those who are interested in maritime communication networks, equipping them to carry out further research in this field.

The authors begin with a historical overview and address the marine business, emerging technologies, and the shortcomings of current network architectures (coverage, connectivity, reliability, etc.). In turn, they introduce a heterogeneous space/air/sea/ground maritime communication network architecture and investigate the transmission scheduling problem in maritime communication networks, together with solutions based on deep reinforcement learning. To accommodate the computation demands of maritime communication services, the authors propose a multi-vessel offloading algorithm for maritime mobile edge computing networks. In closing, they discuss the applications of swarm intelligence in maritime search and rescue.

Tingting Yang received her B.Sc. and Ph.D. degrees from Dalian Maritime University, China, in 2004 and 2010, respectively. She is currently a Professor at the School of Electrical Engineering and Intelligentization, Dongguan University of Technology, China. From September 2012 to August 2013, she was a visiting scholar at the Broadband Communications Research (BBCR) Lab, Department of Electrical and Computer Engineering, University of Waterloo, Canada. Her research interests are in the areas of maritime wideband communication networks, DTN networks, and green wireless communications. She serves as the Associate Editor-in-Chief of the journal IET Communications, as well as an Advisory Editor for SpringerPlus. She also served as a TPC Member for the conferences IEEE ICC’14 and ICC’15.

Xuemin (Sherman) Shen received his Ph.D. degree in Electrical Engineering from Rutgers University, New Brunswick, NJ, USA, in 1990. He is currently a University Professor with the Department of Electrical and Computer Engineering, University of Waterloo, Canada. His research focuses on resource management in interconnected wireless/wired networks, wireless network security, social networks, smart grids, and vehicular ad hoc and sensor networks. He is a registered Professional Engineer of Ontario, Canada, an Engineering Institute of Canada Fellow, a Canadian Academy of Engineering Fellow, a Royal Society of Canada Fellow, and a Distinguished Lecturer of the IEEE Vehicular Technology Society and Communications Society.

Dr. Shen received the R.A. Fessenden Award from the IEEE, Canada, in 2019, the James Evans Avant Garde Award from the IEEE Vehicular Technology Society in 2018, and the Education Award from the IEEE Communications Society in 2017. He has also received the Excellent Graduate Supervision Award (2006) and the Outstanding Performance Award 5 times from the University of Waterloo, as well as the Premier’s Research Excellence Award (PREA) from the Province of Ontario, Canada (2003). He is the Editor-in-Chief of the IEEE Internet of Things Journal and the Vice President of Publications at the IEEE Communications Society.