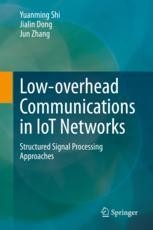 The recent developments in wireless communications, networking, and embedded systems have driven various innovative Internet of Things (IoT) applications, e.g., smart cities, mobile healthcare, autonomous driving and drones. A common feature of these applications is the stringent requirements for low-latency communications. Considering the typical small payload size of IoT applications, it is of critical importance to reduce the size of the overhead message, e.g., identification information, pilot symbols for channel estimation, and control data. Such low-overhead communications also help to improve the energy efficiency of IoT devices. Recently, structured signal processing techniques have been introduced and developed to reduce the overheads for key design problems in IoT networks, such as channel estimation, device identification, and message decoding. By utilizing underlying system structures, including sparsity and low rank, these methods can achieve significant performance gains.

This book provides an overview of four general structured signal processing models: a sparse linear model, a blind demixing model, a sparse blind demixing model, and a shuffled linear model, and discusses their applications in enabling low-overhead communications in IoT networks. Further, it presents practical algorithms based on both convex and nonconvex optimization approaches, as well as theoretical analyses that use various mathematical tools.

Yuanming Shi received his B.S. degree in Electronic Engineering from Tsinghua University, Beijing, China, in 2011, and his Ph.D. in Electronic and Computer Engineering from The Hong Kong University of Science and Technology (HKUST), in 2015. Since September 2015, he has been at the School of Information Science and Technology at ShanghaiTech University, where he is currently a tenured Associate Professor. He visited the University of California, Berkeley, USA, from October 2016 to February 2017. Dr. Shi is a recipient of the 2016 IEEE Marconi Prize Paper Award in Wireless Communications, and the 2016 Young Author Best Paper Award by the IEEE Signal Processing Society. His research areas include optimization, statistics, machine learning and signal processing, and their applications to 6G, IoT and AI.

Jialin Dong received her B.S. degree in Communication Engineering from the University of Electronic Science and Technology of China, Chengdu, China, in 2017. She is currently a graduate student at ShanghaiTech University’s School of Information Science and Technology, and is also a Research Assistant at the Department of Electronic and Information Engineering at the Hong Kong Polytechnic University. Her research interests include mathematical optimization and high-dimensional probability.

Jun Zhang received his Ph.D. in Electrical and Computer Engineering from the University of Texas at Austin in 2009. He is an Assistant Professor at the Department of Electronic and Information Engineering at the Hong Kong Polytechnic University (PolyU). His research interests include wireless communications and networking, mobile edge computing and edge learning, distributed learning and optimization, and big data analytics. Dr. Zhang co-authored the books “Fundamentals of LTE” (Prentice-Hall, 2010), and “Stochastic Geometry Analysis of Multi-Antenna Wireless Networks” (Springer, 2019). He is a co-recipient of the 2019 IEEE Communications Society & Information Theory Society Joint Paper Award, the 2016 Marconi Prize Paper Award in Wireless Communications, and the 2014 Best Paper Award for the EURASIP Journal on Advances in Signal Processing. Two papers he co-authored received the IEEE Signal Processing Society’s Young Author Best Paper Award in 2016 and 2018, respectively. He also received the 2016 IEEE ComSoc Asia-Pacific Best Young Researcher Award. He is an editor of IEEE Transactions on Wireless Communications, IEEE Transactions on Communications, and the Journal of Communications and Information Networks.