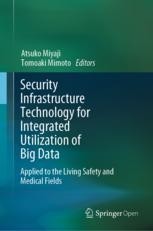 Applied to the Living Safety and Medical Fields

This book also describes the latest related findings in both the living safety and medical fields. In the living safety field, to prevent injuries occurring in everyday life, it is necessary to analyze injury data, find problems, and implement suitable measures. But most cases don’t include enough information for injury prevention because the necessary data is spread across multiple organizations, and data integration is difficult from a security standpoint. This book introduces a system for solving this problem by applying a method for integrating distributed data securely and introduces applications concerning childhood injury at home and school injury. In the medical field, privacy protection and patient consent management are crucial for all research. The book describes a medical test bed for the secure collection and analysis of electronic medical records distributed among various medical institutions. The system promotes big-data analysis of medical data with a cloud infrastructure and includes various security measures developed in our project to avoid privacy violations.

Atsuko MIYAJI received her B. Sc., M. Sc. and Dr. Sci. degrees in Mathematics from Osaka University, Japan in 1988, 1990, and 1997, respectively. She joined Panasonic Co., LTD from 1990 to 1998 and engaged in research and development for secure communication. She was an associate professor at the Japan Advanced Institute of Science and Technology (JAIST) from 1998 to 2007, and has been a professor there since 2007. She has also been a professor at the Graduate School of Engineering, Osaka University since 2015. Her research interests include the application of number theory in cryptography and information security. She has received numerous awards, including the International Conference on Applications and Technologies in Information Security (ATIS 2016) Best Paper Award, the 16th IEEE Trustcom Best Paper Award (2017), and IEICE Milestone Certification (2017). She is a member of the International Association for Cryptologic Research, the Institute of Electronics, Information and Communication Engineers, the Information Processing Society of Japan, and the Mathematical Society of Japan.

Tomoaki MIMOTO received his Bachelor’s degree in Engineering from Osaka University, Japan, in 2012, and his Master’s degree (Outstanding Performance Award) in Information Science from the Japan Advanced Institute of Science and Technology in 2014. He joined the KDDI in 2014, and has been with KDDI Research, Inc. since 2015, where he is currently an associate research engineer in the Information Security Group.