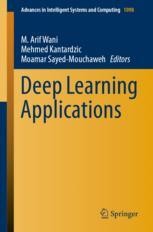 Prof. M. Arif Wani completed his M.Tech. in Computer Technology at the Indian Institute of Technology, Delhi, and his Ph.D. in Computer Vision at Cardiff University, UK. Currently, he is a Professor at the University of Kashmir, having previously served as a Professor at California State University Bakersfield. His main research interests are in gene expression datasets, face recognition techniques/algorithms, artificial neural networks, and deep architectures. He has published many papers in reputed journals and conferences in these areas. He was honored with the International Technology Institute Award in 2002 by the International Technology Institute, California, USA. He is a member of many academic and professional bodies, e.g., the Indian Society for Technical Education, Computer Society of India, IEEE USA, and Optical Society of America.

Dr. Mehmed Kantardzic received his Ph.D. in Computer Science in 1980, M.S. in Computer Science in 1976, and B.S. in Electrical Engineering in 1972, all from the University of Sarajevo, Bosnia, and Herzegovina. He served as an Assistant, and Associate Professor at the University of Sarajevo, and later as Associate and since 2004 as Full Professor at the University of Louisville. Currently, he is the Director of the Data Mining Lab as well as the Director of CECS Graduate Studies at the CECS Department. His research focuses on data mining & knowledge discovery, machine learning, soft computing, click fraud detection and prevention, concept drift in streaming data, and distributed intelligent systems. Dr. Kantardzic is the author of six books including the textbook: “Data Mining: Concepts, Models, Methods, and Algorithms” (John Wiley, second edition, 2011) which is accepted for data mining courses at more than hundred universities in USA and abroad. He is the author of over 40 peer-reviewed journal publications, 20 book chapters, and over 200 reviewed articles in the proceedings of international conferences. His recent research projects are supported by NSF, KSTC, US Treasury Department, U.S. Army, and NASA. Dr. Kantardzic was selected as Fulbright Specialist in Information Technology in 2012. Dr. Kantardzic has served on the Editorial Boards for several international journals, and he is currently an Associate Editor for WIREs Data Mining and Knowledge Discovery Journal.

Prof. Moamar Sayed-Mouchaweh received his Ph.D. from the University of Reims, France. He was working as Associated Professor in Computer Science, Control, and Signal Processing at the University of Reims, France, in the Research Centre in Sciences and Technology of the Information and the Communication. In December 2008, he obtained the Habilitation to Direct Research (HDR) in Computer science, Control, and Signal Processing. Since September 2011, he is working as a Full Professor in the High National Engineering School of Mines Telecom Lille Douai (France), Department of Computer Science and Automatic Control. He edited and wrote several Springer books and served as a Guest Editor of several special issues of international journals. He also served as IPC Chair and Conference Chair of several international workshops and conferences. He is serving as a member of the Editorial Board of several international journals.