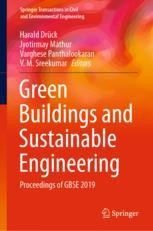 This book comprises the proceedings of the International Conference on Green Buildings and Sustainable Engineering (GBSE 2019), which focused on the theme “Ecotechnological and Digital Solutions for Smart Cities”. The papers included address all aspects of green buildings and sustainability practices in civil engineering, and focus on ways and means of reducing pollution and degradation of the environment through efficient usage of energy and water. The book will prove a valuable reference resource for researchers, practitioners, and policy makers.

Dr.-Ing. Harald Drück is a Mechanical Engineer who has been working at the Institute for Thermodynamics and Thermal Engineering (ITW), today Institute for Building Energetics Thermotechnology and Energy Storage (IGTE), University of Stuttgart for more than 20 years. Since 1999 he has been the Head of the Research and Testing Centre for Solar Thermal Systems (TZS). His main research interests lie in the field of solar thermal technology, focusing on advanced heating and cooling systems, thermal energy storage and the development of performance testing methods as well as energy efficient solar buildings. Harald Drück has authored or co-authored around 300 publications in the field of solar thermal energy and heat storage. He is convenor of several German and European working groups related to the standardisation and testing of solar thermal systems and components, such as the Solar Keymark Network, the Global Solar Certification Network and the Solar Certification Fund. He acts as an advisor to several high-level international organisations, is chairman or member of the scientific board of several conferences and workshops and teaches a highly successful postgraduate course on solar thermal energy at the University of Stuttgart. Furthermore he was one of the initiators of the German and European Solar Thermal Technology Platforms and is currently a member of the steering committees of both platforms. In addition to his activities at the University, he is the Director of SWT – Solar- und Wärmetechnik Stuttgart. SWT is a spin-off company of ITW and is a service provider in the field of solar thermal energy.
Dr. Jyotirmay Mathur is working as Professor in Mechanical Engineering, and Centre for Energy and Environment in Malaviya National Institute of Technology, Jaipur (India). Dr. Mathur works in the field of energy planning and modeling, building energy simulation, energy conservation in buildings, and life cycle assessment of renewable energy systems. He has 70 journal papers, more than 150 talks, several research projects including 5 international collaborative projects besides having supervised 11 Ph.D. scholars in his credit. He is an active member in several professional bodies related to energy management in buildings. Current activities include studies on adaptive thermal comfort, modeling of passive and low energy cooling systems, development of standards and codes for energy efficiency, long term energy system modeling penetration of renewable energy. His research areas include energy efficiency in buildings, passive cooling systems, renewable energy and energy policy modelling, development of codes and standards, low energy cooling.

Dr.-Ing. Varghese Panthalookaran MSc: Professor and Coordinator of Rajagiri Research and Consultancy Center (RRCC) at Rajagiri School of Engineering & Technology (RSET). He acquired a doctoral degree in Mechanical Engineering (Dr.-Ing.) in 2007 from the University of Stuttgart, Germany, where he was also employed as research assistant. He holds a Master degree in Physics from Cochin University of Science and Technology (CUSAT). He has worked as a guest-lecturer in Physics at Sacred Heart College, Thevara. He is a recognized research adviser of Birla Institute of Technology (BIT), Mesra/India. He is also a reviewer for international journals and conferences. He has written three books in three languages. His drama book in Malayalam titled: “Buddhan Veendum Chirikkunnu” (translated: Buddha Laughs Again” has won him the Endowment Award of Kerala Sahitya Academy in 2000. He also have a German book "Die Lehre Jesu als Schluessel zur Lebensfreude" to his credit. He is member of professional bodies like American Society of Mechanical Engineering (ASME), Institute of Electrical and Electronics Engineers (IEEE) and Indian Society of Technical Education (ISTE). Currently, he also serves as the member of General Department Council for Education and Communication Media of the congregation of the Carmelites of Mary Immaculate (CMI).

Dr. Sreekumar V.M. is currently working as Assistant Professor in the Mechanical Engineering Department, Rajagiri School of Engineering & Technology (RSET), Kochi, India. He completed B.E. in Metallurgical Engineering from National Institute of Technology Durgapur in 2001 and Ph.D in Metallurgical and Materials Engineering from Indian Institute of Technology Kharagpur in 2008. He worked as Post Doctoral Fellow in Deakin University Australia from 2008 to 2011 and Brunel University UK from 2012 to 2015. He has 25 technical publications in National and International Journals and Conference proceedings and reviewed papers in several international Journals. He received life membership from Indian Institute of Metals and Materials Research Society of India and Chartered Engineer certificate from Institution of Engineers India.