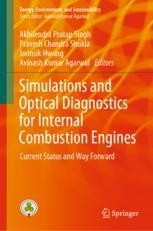 This book focuses on combustion simulations and optical diagnostics techniques, which are currently used in internal combustion engines. The book covers a variety of simulation techniques, including in-cylinder combustion, numerical investigations of fuel spray, and effects of different fuels and engine technologies. The book includes chapters focused on alternative fuels such as DEE, biomass, alcohols, etc. It provides valuable information about alternative fuel utilization in IC engines. Use of combustion simulations and optical techniques in advanced techniques such as microwave-assisted plasma ignition, laser ignition, etc. are few other important aspects of this book. The book will serve as a valuable resource for academic researchers and professional automotive engineers alike.