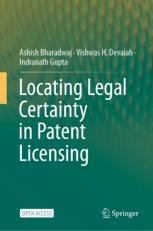 This open access book presents global perspectives and developments within the information and communication technology (ICT) sector, and discusses the bearing they have on policy initiatives that are relevant to the larger digital technology and communications industry. Drawing on key developments in India, the USA, UK, EU, and China, it explores whether key jurisdictions need to adopt a different legal and policy approach to address the unique concerns that have emerged within the technology-intensive industries. The book also examines the latest law and policy debates surrounding patents and competition in these regions. Initiating a multi-faceted discussion, the book enables readers to gain a comprehensive understanding of complex legal and policy issues that are beginning to emerge around the globe.

Dr Ashish Bharadwaj is a Professor & Dean of the Jindal School of Banking & Finance, and Executive Director of the rankings & benchmarking office at the Jindal Global University. He also serves as a founding director of the Jindal Initiative for Research in IP & Competition (JIRICO). He previously taught at Jindal Global Law School for 5 years. He holds a B.A. Honors in Economics from Delhi University, and an M.Sc. in Economics from the College of Engineering, Anna University. As a European Commission Erasmus Mundus scholarship holder, he obtained a LL.M. in Law & Economics from Rotterdam, Hamburg & Manchester. He received a Max Planck Society fellowship to pursue his doctoral studies in Law & Economics, and holds a PhD from the Max Planck Institute for Innovation & IP & University of Munich (LMU), Germany. Dr Bharadwaj writes on technology innovation, IP and the interface of patent law & policy.

Dr. Vishwas Devaiah is a Professor at the Jindal Global Law School, Executive Director of the Centre for Intellectual Property and Technology Law, and Director of JIRICO. He holds a Ph.D. from the University of Liverpool; LL.M. from Warwick University; and BAL, LL.B. from Bangalore University. He was the recipient of the IMLAB scholarship, and was awarded the 2015 Microsoft IP Teaching Fellowship to engage with researchers at the University of Washington Law School. Dr Devaiah’s primary areas of interest are copyright law, patent law, health law & biotechnology law. He serves as a reviewer for the Asian Comparative Law Journal, NUJS Law Review & the Indian Journal of Medical Ethics. Dr. Devaiah was also the Managing Editor of JGLS’s flagship journal, Jindal Global Law Review, which is published by Springer. He is co-founder of the Initiative for Medicines Access & Knowledge (IMAK), New York.

Dr. Indranath Gupta is a Professor at the Jindal Global Law School, Co-Director of JIRICO & a Senior Fellow at the Jindal Institute of Behavioural Sciences. Dr. Gupta holds an LL.B. degree from the University of Calcutta; an LLM with distinction from the University of Aberdeen; and a postgraduate research LLM in Computer Law from the University of East Anglia. He obtained his Ph.D. from Brunel University, London.  He was appointed as the research collaborator by the Università Bocconi, Milan for a project funded by the European Commission under the 7th Framework Programme. Dr. Gupta has published widely in international & national law journals and has authored a number of books. His research areas include copyright, database right, data protection, IT law and the interface of IP & competition law.