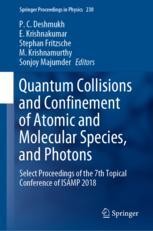 Quantum Collisions and Confinement of Atomic and Molecular Species, and Photons

Select Proceedings of the 7th Topical Conference of ISAMP 2018

This book comprises selected peer-reviewed papers presented at the 7th Topical Conference of the Indian Society of Atomic and Molecular Physics, jointly held at IISER Tirupati and IIT Tirupati, India. The contributions address current topics of interest in atomic and molecular physics, both from the theoretical and experimental perspective. The major focus areas include quantum collisions, spectroscopy of atomic and molecular clusters, photoionization, Wigner time delay in collisions, laser cooling, Bose-Einstein condensates, atomic clocks, quantum computing, and trapping and manipulation of quantum systems. The book also discusses emerging topics such as ultrafast quantum processes including those at the attosecond time-scale. This book will prove to be a valuable reference for students and researchers working in the field of atomic and molecular physics.

Dr. P. C. Deshmukh is Professor at the Department of Physics, and Dean, Sponsored Research and Consultancy, at the Indian Institute of Technology Tirupati. He obtained his PhD from Nagpur University, followed by post doctoral work at the University of Aarhus, the University of Notre Dame, and Georgia State University. Prior to joining IIT Tirupati, Dr. Deshmukh was professor and head at the department of physics, IIT Madras. His primary areas of interest include photoabsorption processes in free/confined atoms, molecules and ions. He is a former president of the Indian Society of Atomic and Molecular Physics (ISAMP), and is a member of several national and international scientific advisory committees. He has published several articles in international peer-reviewed journals, and has also edited a previous proceedings of ISAMP, and also of AISAMP.

Dr. E. Krishnakumar retired as Senior Professor from Tata Institute of Fundamental Research (TIFR) Mumbai in 2017 and currently  a Raja Ramanna Fellow and Emeritus Scientist at the Raman Research Institute, Bangalore. He obtained his PhD from Physical Research Laboratory, Ahmedabad following which he worked as a scientist at the Space Applications Centre, Ahmedabad and the Jet Propulsion Laboratory at Caltech, Pasadena. His research interests include electron-molecule collisions in gas and condensed phase, molecular dynamics, electron and ion momentum imaging and spectroscopy, photoionization and photodetachment. He has published more than 100 papers in international peer-reviewed journals and delivered around 50 invited talks. Dr. Krishnakumar was President of the Indian Society of Atomic and Molecular Physics (ISAMP), has been a member of several national and international advisory committees and a Fellow of Indian Academy of Sciences.

Dr. Stephan Fritzsche is Professor and Theory-Chair for 'Correlated Quantum Systems' at the Helmholtz Institute Jena. He obtained his PhD from the University of Kassel. Prior to joining the Helmholtz Institute, he worked at Oulu University (Finland) and the Frankfurt Institute of Advanced Studies. His research focuses mainly on the structure and dynamics of finite quantum systems with applications in atomic, optical and nuclear physics. Dr. Fritzsche and his group is working to develop new many-body techniques for describing the electron dynamics of ions, atoms and plasma in strong fields.

Dr. M. Krishnamurthy is Professor at the Department of Nuclear and Atomic Physics, TIFR Mumbai. After completing his PhD from TIFR, he was a postdoctoral researcher at the Joint Institute for Laboratory Astrophysics, University of Colorado Boulder. His research interests include non-linear optics, intense lasers, plasma physics, mass spectrometry, nanoclusters, and X-ray VUV generation. He has published over 100 articles in international peer-reviewed journals,  and also delivered over 75 invited talks at national and international conferences. Dr. Krishnamurthy has received several awards and distinctions such as INSA Young Scientist Medal, and the DAE-SRC Outstanding Investigator Award. He is also an elected Fellow of the Indian Academy of Sciences.

Dr. Sonjoy Majumder is Associate Professor at the Physics department, IIT Kharagpur. He obtained his PhD from the Indian Institute of Astrophysics Bangalore. His major research areas include physics of cold and ultra-cold atoms, light-matter interaction, computational many-body physics, and astrophysics. He has published over 50 articles in international journals of repute. He is currently the principal investigator on two DST and DAE sponsored projects.