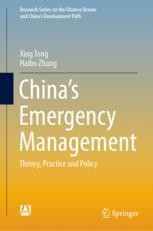 In this timely book about the current state of research and practice of emergency management in China, the authors take as their basic premises that we now live in a risk society and that our collective ability to deal with disasters and their aftermath is more important than ever. Set within a multi-disciplinary framework that places risk, disaster and crisis, the three phases of emergency management, on an analytical continuum, and drawing on empirical data obtained through surveys, observations, and interviews, the study not only provides a thorough overview of recent progress in our theoretical understanding of the subject but also offers insights on how scientifically informed policies can improve the way emergency management is done in China.

Xing Tong was born in 1948 in Nanjing, Jiangsu Province. He is a Professor at the School of Government and the Director of Center for Societal Risk and Public Crisis Management Studies at Nanjing University, as well as Director of Jiangsu Province Social Risk Research Base. He is also a member of the evaluation board of National Philosophy and Social Science Planning Fund, member of the National Disaster Mitigation Board, and Deputy Director of the China Social Security Association. Professor Tong has published more than 10 books as either the sole author or editor, and about 20 textbooks as either the chief editor or co-editor. He has also published 300 journal papers in Chinese. He was awarded the first degree in Social Science Research by the National University and undertook several successful national projects sponsored by the National Social Science Fund, such as “Research on establishing and improving a social alarm system and emergency management system” and “Innovation of social management and social system reforms”. One of the projects, “China emergency management: theory, practice and policy”, was included in the book series on national philosophy and social science”. He also received a special subsidy from the State Council in 1992. His research areas cover social science theories, social problems and social development, social security theories and systems, social risk and public crisis management.

Haibo Zhang holds a Ph.D. in Management, and is a Professor at Nanjing University’s School of Government. He is a researcher and Executive Director of Center for Societal Risk and Public Crisis Management Studies of Nanjing University. He received his bachelor’s degree in Insurance from Nanjing University in 2001, master’s degree in Sociology in 2005 and doctor’s degree in Administrative Management in 2005. He was awarded a fellowship at Harvard Kennedy School Ash Center for Democratic Governance and Innovation, and worked as a visiting scholar at the Graduate School of International and Public Affairs, University of Pittsburgh. He has won several honors such as the first honor of National University Social Science Research. His research focuses on emergency management.