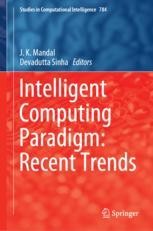 This book includes extended versions of selected works presented at the 52nd Annual Convention of Computer Society of India (CSI 2017), held at Science City, Kolkata on 19–21 January 2018. It features a collection of chapters focusing on recent trends in computational intelligence, covering topics such as ANN, neuro-fuzzy based clustering, edge detection, data mining, mobile cloud computing, intelligent scheduling, processing and authentication. It also discusses societal applications of these methods. As such it is useful for students, researchers and industry professionals working in the area of computational intelligence.

Jyotsna Kumar Mandal is former Dean of the Faculty of Engineering, Technology and Management, and Senior Professor at the Department of Computer Science & Engineering, University of Kalyani, India. He has obtained his Ph.D. (Eng.) from Jadavpur University. Professor Mandal has co-authored six books: Algorithmic Design of Compression Schemes and Correction Techniques—A Practical Approach; Symmetric Encryption—Algorithm, Analysis and Applications: Low Cost-based Security; Steganographic Techniques and Application in Document Authentication—An Algorithmic Approach; Optimization-based Filtering of Random Valued Impulses—An Algorithmic Approach; and Artificial Neural Network Guided Secured Communication Techniques: A Practical Approach; all published by Lambert Academic Publishing, Germany. He has also authored more than 350 papers on a wide range of topics in international journals and proceedings. Twenty-three scholars awarded Ph. D. Degree under his supervision. His profile is included in the 31st edition of Marque’s World Who’s Who published in 2013. Government of West Bengal, India conferred him ‘Siksha Ratna ‘  award as an outstanding teacher in 2018. His areas of research include coding theory, data and network security, remote sensing and GIS-based applications, data compression, error correction, visual cryptography and steganography, distributed and shared memory parallel programming. He is Fellow of Institution of Electronics and Telecommunication Engineers, and Members of IEEE, ACM, and Computer Society of India.

Prof. Dr Devadatta Sinha graduated with honors in Mathematics from Presidency College and completed his postgraduation in Applied Mathematics and then in Computer Science. He completed his Ph.D. in the field of Computer Science at Jadavpur University in 1985. He started his teaching career at the Department of Computer Engineering at BIT Mesra Ranchi, then at Jadavpur University and Calcutta University, where he was a Professor at the Department of Computer Science and Engineering. He also served as Head of the Department of Computer Science and Engineering, and Convener of the Ph.D. Committee in Computer Science and Engineering and in Information Technology at the University of Calcutta. He also served as Vice-Chairman of the Research Committee in Computer Science and Engineering, West Bengal University of Technology. During his career, he has written a number of research papers in national and international journals and conference proceedings. He has also written a number of expository articles in periodicals, books and monographs. His research interests include software engineering, parallel and distributed algorithms, bioinformatics, computational Intelligence, computer education, mathematical ecology and networking. He has total teaching/research experience of more than 38 years. He was also on the editorial boards of various journals and conference proceedings and served in different capacities in the program and organizing committees of several national and international conferences. He was Sectional President, Section of Computer Science, Indian Science Congress Association for the year 1993–94. He is an active member of a number of academic bodies in various institutions. He is a fellow and senior life member of CSI and has been involved in different activities including organization of different computer/IT courses. He is also a Computer Society of India Distinguished Speaker.