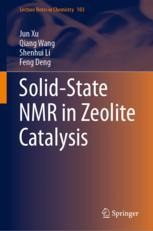 Solid-State NMR Characterization of Heterogeneous Catalysts and Catalytic Reactions provides a comprehensive account of state-of-the-art solid-state NMR techniques and the application of these techniques in heterogeneous catalysts and related catalytic reactions. It includes an introduction to the basic theory of solid-state NMR and various frequently used techniques. Special emphasis is placed on characterizing the framework and pore structure, active site, guest-host interaction, and synthesis mechanisms of heterogeneous catalysts using multinuclear one- and two-dimensional solid-sate NMR spectroscopy. Additionally, various in-situ solid-state NMR techniques and their applications in investigation of the mechanism of industrially important catalytic reactions are also discussed. Both the fundamentals and the latest research results are covered, making the book suitable as a reference guide for both experienced researchers in and newcomers to this field.
Feng Deng is a Professor at Wuhan Institute of Physics and Mathematics, Chinese Academy of Sciences.

Prof. Feng Deng received his B.Sc. degrees (1988) from the Department of Chemistry, Sichuan University, and completed his MA.Sc (1991) and Ph.D. (1996, under the supervision of Prof. Chaohui Ye and Prof. Youru Du) from Wuhan Institute of Physics and Mathematics, Chinese Academy of Sciences. After his postdoctoral research (1997–1998) at the Department of Chemistry, Texas A&M University (with Prof. James F. Haw), he began working at Wuhan Institute of Physics and Mathematics as a professor (1999–present). His research interests include solid-state NMR methodology and its application to the heterogeneous catalysis and chemistry of functional materials. He currently serves on the editorial boards of Solid State Nuclear Magnetic Resonance, Chinese Science Bulletin and Chinese Journal of Magnetic Resonance and has published more than 200 papers in international journals, such as JACS, Angew Chem, Chem Sci, J Phys Chem A/B/C, Chem Commun and J Magn Reson etc.
Prof. Jun Xu graduated with a degree in Chemical Engineering from Wuhan University of Science and Technology in 2001 and obtained his Ph.D. in Physical Chemistry from Wuhan Institute of Physics and Mathematics (WIPM), Chinese Academy of Sciences in 2007.  In 2009, he became an Associate Professor, and since 2014, he has been a Professor at the WIPM. He spent one year as a visiting scholar at Cardiff Catalysis Institute, Cardiff University, UK. His primary research field is solid state NMR and heterogeneous catalysis, and his work focuses on the application of in-situ and sensitivity enhancement NMR techniques for the characterization of active sites and exploration of reaction mechanisms in zeolites, metal oxides and nanoparticles.

Associated Prof. Qiang Wang obtained his B.Sc. degrees in Applied Physics from Huazhong University of Science and Technology (HUST) in 2005, and his Ph.D. under the direction of Prof. Feng Deng and Prof. Jean-Paul Amoureux at Wuhan Institute of Physics and Mathematics (WIPM), Chinese Academy of Sciences in 2011 and the University of Lille-1, France in 2010. Currently an Associate Professor at the WIPM, his main interests are the solid-state NMR methodology and its applications in heterogeneous catalysis.

Dr. Shenhui Li obtained his Ph.D. from Wuhan Institute of Physics and Mathematics (WIPM), Chinese Academy of Sciences in 2008. He served as a postdoctoral research fellow at Iowa State University from 2008 to 2010 and joined the WIPM in 2010. His current research interests are the development of the solid-state NMR methodology for heterogeneous catalysts and porous materials.

“The reviewer would like to recommend this book for anyone who would like to quickly grasp the capability of solid-state NMR as well as researchers working on nanoporous materials, nanocrystals, nanomaterials, Li-ion batteries and capacitors with surface and interfacial phenomena in addition to zeolites and zeolite related materials. This is exciting reading and reminded the reviewer of the ability of solid-state NMR to assess the mechanisms of intermolecular interactions, chemical reactions and transport phenomena.” (Shingo Watanabe, Johnson Matthey Technology Review, Vol. 64 (2), 2020)