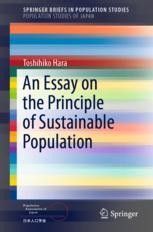 An Essay on the Principle of Sustainable Population

This book focuses on the future of the global population and proposes revising Malthus’ Law. The United Nations estimates that the global population will top 11 billion by 2100, at which point its growth will be near an end: it will find a new ‎equilibrium in a long demographic transition from high birth and death rates to low ones.

However, the author reviews the fertility developments reported in the World Population Prospects 2017, which are near or below the replacement level in most regions, with the important exception of Sub-Saharan Africa, and warns of a possible scenario of the extinction of human society. Returning to Malthus, his Essay on the Principle of Population is critically reconsidered. Simple simulations show that exponential growth and decay are unsustainable beyond the narrow ranges of the net reproduction rate. In addition, the length of reproduction periods, which depends on women’s lifespans, plays a pivotal role. The limits of growth are given in any case, to the extent that time and space will permit.

From this perspective, teleological conditions such as instinct, passion, or even natural reproductive tendencies are irrelevant and unnecessary. When the population deviates too far from the replacement level, either its shrinking or massive growth will overshoot the limits of its existence. This principle of sustainable population indicates that the demographic transition must follow a logistic curve.

Using a system dynamics approach, the author constructs a simulation model based on four major loops: fertility, reproduction timing, social capital accumulation, and lifespan. Using only endogenous variables, this model successfully reproduces the historical process of the demographic transition in Japan. Thereby, it shows that the timing and periods of reproduction, maximum fertility, and maximum lifespan hold the key to sustainability. Based on these findings, the author subsequently discusses recovering replacement fertility, extending lifespans, and the demographic future of the human race.