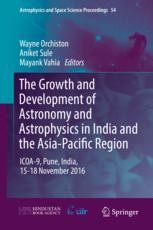 This book discusses the study of astronomy in different cultures, applied historical astronomy and history of multi-wavelength astronomy, and the genesis of recent research. It contains peer-reviewed papers gathered from the International Conference on Oriental Astronomy 9 (ICOA-9) held at the Indian Institute of Science Education and Research Pune, India. It  covers the areas like megalithic and other prehistoric astronomy, astronomical records in ancient texts, astronomical myths and architecture, astronomical themes in numismatics and rock art, ancient astronomers and their instruments, star maps and star catalogues, historical records and observations of astronomical events, calendars, calendrical science and chronology, the relation between astronomy and mathematics, and maritime astronomy. This book will be a valuable complement to a future generation of students and researchers who develop an interest in the field of Asian and circum-Pacific history of astronomy.

WAYNE ORCHISTON is an adjunct professor of Astronomy in the Centre for Astrophysics at the University of Southern Queensland, Australia. A former secretary of the International Astronomical Union (IAU) Commission 41 (History of Astronomy), he is the founder and former chair of the IAU Working Group on Historic Radio Astronomy and is also on the committee of the IAU Working Group on the Transits of Venus. In addition to Commission 41, he is a member of IAU Commission 40 (Radio Astronomy) and Commission 46 (Astronomy Education and Development). He is the founding editor of the Journal of Astronomical History and Heritage. Wayne’s research interests lie mainly in astronomical history, astronomical education and meteoritics, and he has more than 200 publications, including the following books: Nautical Astronomy in New Zealand, The Voyages of James Cook, Astronomical Instruments and Archives from the Asia-Pacific Region (co-edited by Richard Stephenson, Nha Il-Seong and Suzanne Débarbat), The New Astronomy: Opening the Electromagnetic Window and Expanding our View of Planet Earth (editor), Proceedings of the 5th International Conference on Oriental Astronomy (co-edited by Kwan-Yu Chen, Boonrucksar Soonthornthum and Richard Strom) and Foundations of Australian Radio Astronomy, A New Picture of the Southern Sky (co-authored by Woody Sullivan).

ANIKET SULE is a faculty member at the Homi Bhabha Centre for Science Education, Tata Institute of Fundamental Research, Mumbai, India, where he also looks after the Indian National Astronomy Olympiad Programme. He is a visiting faculty at Centre for Excellence in Basic Sciences, University in Mumbai, India, since 2012. He earned his PhD in Natural Sciences (Astrophysics) from the University of Potsdam, Germany. He is the regional coordinator (Asia-Pacific) for International Olympiad on Astronomy and Astrophysics (IOAA). His research interest includes the history of astronomy in India and solar physics. MAYANK VAHIA is an associate professor at the Department of Astronomy and Astrophysics, Tata Institute of Fundamental Research, Mumbai, India. He earned his PhD in Astrophysics from the University of Bombay, India. He also had been associated with Louisiana State University, USA; Max Planck Institut fur Physik und Astrophysik, Germany; Institut fur Extraterrestrische Physik, Germany; University of Durham, UK; University of California, USA; and Nehru Planetarium, Mumbai, India. He is the founder of the Society for South Asian Archaeology and an active member of Indian Physics Association, Astronomical Society of India, Bombay Association for Science Education, International Astronomical Union, New York Academy of Sciences, National Association of Science Communicators, Commonwealth Association for Science, Technology and Mathematics Education, Indian Association of Physics Teachers, Indian Nuclear Society, World Innovation Foundation, and Archaeological Society of India. His research interest includes high-energy astrophysics (mainly cosmic rays, X-rays, and gamma rays), archaeoastronomy, solar physics, stellar physics, magnetic fields of stars, electromagnetic and particle emission from stars, magnetosphere of earth, particle entry and release, and computer simulation of astrophysical environments.
Show all