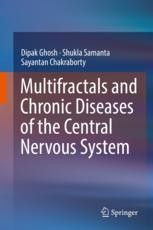 Multifractals and Chronic Diseases of the Central Nervous System

This book primarily focuses on the study of various neurological disorders, including Parkinson’s (PD), Huntington (HD), Epilepsy, Alzheimer’s and Motor Neuron Diseases (MND) from a new perspective by analyzing the physiological signals associated with them using non-linear dynamics.

The development of nonlinear methods has significantly helped to study complex nonlinear systems in detail by providing accurate and reliable information. The book provides a brief introduction to the central nervous system and its various disorders, their effects on health and quality of life, and their respective courses of treatment, followed by different bioelectrical signals like those detected by Electroencephalography (EEG), Electrocardiography (ECG), and Electromyography (EMG).

In turn, the book discusses a range of nonlinear techniques, fractals, multifractals, and Higuchi’s Fractal Dimension (HFD), with mathematical examples and procedures. A review of studies conducted to date on neurological disorders like epilepsy, dementia, Parkinson’s, Huntington, Alzheimer’s, and Motor Neuron Diseases, which incorporate linear and nonlinear techniques, is also provided. The book subsequently presents new findings on neurological disorders of the central nervous system, namely Parkinson’s disease and Huntington’s disease, by analyzing their gait characteristics using a nonlinear fractal based technique: Multifractal Detrended Fluctuation Analysis (MFDFA). In closing, the book elaborates on several parameters that can be obtained from cross-correlation studies of ECG and blood pressure, and can be used as markers for neurological disorders.

Prof. Dipak Ghosh, a University Gold medalist and a Ph.D. in High Energy Physics, is presently an Emeritus Professor at the Sir C.V. Raman Centre for Physics and Music, and Director (Hony.) of the Biren Roy Research Laboratory for Radioactivity and Earthquake Studies, Jadavpur University. Formerly, he was a Professor and Dean of the Faculty of Science, Jadavpur University. Prof. Ghosh has received several awards like the S.N. Bose Memorial Medal, C.V. Raman Award by the University Grants Commission etc. in recognition of his in-depth research work. He was the Principal Investigator from India in projects with prestigious research institutes like CERN and FERMI Lab. He has over five hundred publications in reputed international journals and several books to his credit. His research interests include nuclear and particle physics, nonlinear dynamics applied to biomedical problems, and neuro-cognition of music. He has also served as a reviewer for international journals like Physical Review Letters, Physica A, EPL etc.

Dr. Shukla Samanta, who holds a Ph.D. in Physics from Jadavpur University, is presently associated with Seacom Engineering College, Kolkata as an Assistant Professor and Head of the Basic Science and Humanities Department.  She holds a postgraduate degree in Physics from Presidency College, and an M.Tech in Computer Science and Application from the University of Calcutta. She has published several papers on seismic activity, econophysics, and physiological systems in various peer-reviewed international journals. She has also served as a reviewer for international journals. Her present research interest is focused on the nonlinear study of different neurological disorders.

Mr. Sayantan Chakraborty is currently pursuing his Ph.D. in Electrical and Biomedical Signals at the Department of Instrumentation and Electronics Engineering, Jadavpur University. He completed his postgraduate degree in Electrical Power Engineering at the University of Calcutta. He has published several papers on electric bid prices, the Stock Exchange of India and biomedical signals in journals of international repute. He has also served as a reviewer for international journals such as Physica A, IET Science, Measurement & Technology etc. Mr. Chakraborty is also an Assistant Professor and Head of the Department of Electrical and Electronics Engineering at ICFAI University, Tripura. He was previously affiliated with Dr. Sudhir Chandra Sur Degree Engineering College and Seacom Engineering College, Kolkata as an Assistant Professor and Head of the Department of Electrical Engineering.