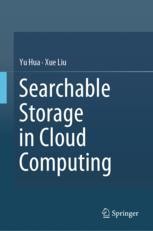 This book presents the state-of-the-art work in terms of searchable storage in cloud computing. It introduces and presents new schemes for exploring and exploiting the searchable storage via cost-efficient semantic hashing computation. Specifically, the contents in this book include basic hashing structures (Bloom filters, locality sensitive hashing, cuckoo hashing), semantic storage systems, and searchable namespace, which support multiple applications, such as cloud backups, exact and approximate queries and image analytics. Readers would be interested in the searchable techniques due to the ease of use and simplicity. More importantly, all these mentioned structures and techniques have been really implemented to support real-world applications, some of which offer open-source codes for public use. Readers will obtain solid backgrounds, new insights and implementation experiences with basic knowledge in data structure and computer systems.

Dr.Yu Hua is a professor at Huazhong University of Science and Technology. He was a postdoc research associate at McGill University in 2009 and a postdoc research fellow at University of Nebraska-Lincoln in 2010-2011. He obtained his B.E and Ph.D degrees from Wuhan University, respectively in 2001 and 2005. His research interests include file systems, cloud storage systems, non-volatile memory, big data analytics, machine learning, etc. His work has been published in multiple top-tier conferences and journals in the area, including OSDI, FAST, MICRO, USENIX ATC, ACM SoCC, SC, HPDC, ICDCS, IPDPS, MSST. He serves as PC chairs, committee members for multiple international conferences, including ASPLOS, SOSP, SC, USENIX ATC, ICS, RTSS, ICDCS, INFOCOM, IPDPS, MSST, DATE. He is a distinguished member of CCF, a senior member of ACM and IEEE, and a member of USENIX. He serves as the Distinguished Speaker of ACM and CCF.

Dr. Xue (Steve) Liu is a professor in the School of Computer Science and a William Dawson Scholar at McGill University. He obtained his Ph.D. in Computer Science from The University of Illinois at Urbana-Champaign and his B.S. degree in Mathematics and M.S. degree in Automatic Control both from Tsinghua University, China. He has published over 250 research papers in major highly-reputable international academic journals and conference proceedings. He has also authored 3 books/monographs and several book chapters. Dr. Liu has served on the organizing committees of 40 major international conferences and workshops. Dr. Liu is an editor/associate editor of IEEE/ACM Transactions on Networking (ToN), ACM Transactions on Cyber-Physical Systems (TCPS) , IEEE Transactions on Vehicular Technology (TVT), and IEEE Communications Surveys and Tutorial (COMST). Dr. Liu is a member of the Tau Beta Pi Engineering Honorary Society, a lifetime member of the ACM, a member of the IEEE, and USENIX.
Show all