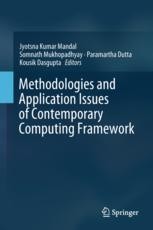 This book brings together the diversified areas of contemporary computing frameworks in the field of Computer Science, Engineering and Electronic Science. It focuses on various techniques and applications pertaining to cloud overhead, cloud infrastructure, high speed VLSI circuits, virtual machines, wireless and sensor networks, clustering and extraction of information from images and analysis of e-mail texts.

The state-of-the-art methodologies and techniques are addressed in chapters presenting various proposals for enhanced outcomes and performances. The techniques discussed are useful for young researchers, budding engineers and industry professionals for applications in their respective fields.

He has published over 145 papers in various leading international journals and has also edited twenty volumes for various major publishers, including Springer.

Dr. Somnath Mukhopadhyay is currently an Assistant Professor at the Department of Computer Science and Engineering, Assam University, Silchar, India. He completed his M.Tech. and Ph.D. degrees in Computer Science and Engineering at the University of Kalyani, India. He has co-authored one book and has edited five books, and has published over 20 papers in various international journals and conference proceedings, as well as three chapters in edited volumes. His research interests include digital image processing, computational intelligence and pattern recognition.

Dr. Paramartha Dutta is currently a Professor at the Department of Computer and System Sciences, Visva Bharati University, West Bengal, India. Prior to this, he served at Kalyani Government Engineering College and College of Engineering in West Bengal as a full-time faculty member. Dr. Dutta completed Bachelor’s and Master’s degrees in Statistics from the Indian Statistical Institute, Calcutta in 1988 and 1990, respectively. Subsequently, he earned his Master of Technology in Computer Science from the same Institute in 1993. Later, in service, he completed his Ph. D in Engineering from the Bengal Engineering and Science University, Shibpur in 2005.

Dr. Dutta has coauthored eight books, and has edited six books. He has published over two hundred papers in various journals and conference proceedings, both international and national, as well as several chapters in books from respected international publishing houses like Elsevier, Springer-Verlag, CRC Press, and John Wiley. He has also served as an editor of special volumes of several prominent international journals.

Dr. Dasgupta has presented numerous papers at various conferences and has also coauthored several books. He is a member of five scientific and professional societies, including the Association for Computing Machinery (ACM) and Indian Society for Technical Education.