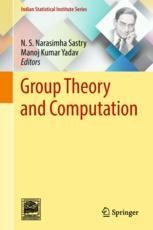 This book is a blend of recent developments in theoretical and computational aspects of group theory. It presents the state-of-the-art research topics in different aspects of group theory, namely, character theory, representation theory, integral group rings, the Monster simple group, computational algorithms and methods on finite groups, finite loops, periodic groups, Camina groups and generalizations, automorphisms and non-abelian tensor product of groups. Presenting a collection of invited articles by some of the leading and highly active researchers in the theory of finite groups and their representations and the Monster group, with a focus on computational aspects, this book is of particular interest to researchers in the area of group theory and related fields of mathematics.

N.S. NARASIMHA SASTRY is currently a visiting professor at the Indian Institute of Technology Dharwad, Karnataka, India. Prior to this, he was a professor of mathematics and Head of the Indian Statistical Institute, Bangalore Center, India. He received his PhD from the University of Pittsburgh, Pennsylvania, USA, and has held visiting positions at the Tata Institute of Fundamental Research, Mumbai, India; Michigan State University, East Lansing, USA; University of Western Australia, Perth, Australia; Rutgers University, New Brunswick, USA; University of Florida, Gainsville, USA; and University of Ghent, Belgium. In addition to publishing more than 30 research articles in various journals, he has also edited books: Buildings, Finite Geometries and Groups and Groups of Exceptional Type, Coxeter Groups and Related Geometries, both published by Springer; as well a Essays in Geometric Group Theory, published by the Ramanujan Mathematical Society. He also co-edited Perspectives in Mathematical Sciences (Volumes 1 and 2), published by World Scientific. His research interests are finite groups including finite simple groups, geometries related to finite simple groups, algebraic codes, Coxeter groups and the Monster.
MANOJ KUMAR YADAV is an associate professor of mathematics at the Harish-Chandra Research Institute, Allahabad, India. He received his PhD in mathematics from Kurukshetra University, Haryana, in 2002. He was awarded the Indian National Science Academy Medal for Young Scientists for 2009 and the Department of Science & Technology—Science and Engineering Research Council (SERC) fellowship “Fast Track Scheme for Young Scientist” for 2005–2008. He is a member of the National Academy of Sciences, India (NASI). His research interests lie in group theory, particularly automorphisms, conjugacy classes and Schur multipliers of groups. He has published over 25 research papers in various respected journals, conference proceedings and contributed volumes.