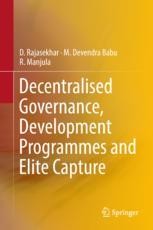 ​This book discusses the elite capture taking place in the development programmes implemented through Grama Panchayats (GPs), the lowest tier in the rural local self-government structure in India. Inclusive growth being the cherished goal of all the developing countries, including India, the book assesses whether checks and balances incorporated in development programmes prevent elite capture and promote inclusive development. It also highlights the role of community-based organisations, such as SHGs, in ensuring development benefits reach marginalized groups.

The policy makers in India introduced decentralised governance to facilitate the participation of marginalized groups in the planning and implementation of development programmes at the local level, and to ensure that development benefits reach them. International agreements such as the Hyogo Framework for Action, Millennium Development Goals and Sustainable Development Goals also call for decentralised governance for inclusive growth. The issue of elite capture has traditionally been studied mainly from the sociological perspective, i.e., how the local upper/dominant castes and classes garner the positions and benefits. But with the new and structured governance system that is in place at the local level in contemporary India, this book explores how decentralised governance is addressing the issue of elite capture. The study closely analyses micro processes of decentralisation to understand how elite capture is taking place. Additionally, it examines this concern from both governance and economic perspectives. The scope of the book is wide, and encompasses several aspects such as the functioning of the local government, decentralised governance, checks and balances in development programmes, community-based organisations, the upward political linkages and elite capture. It is equally relevant to researchers from several social science disciplines, civil society, policy makers, and implementers from the grassroots to national level government.