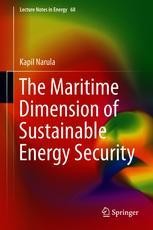 The maritime domain and sustainable energy are two critical aspects of the twenty first century which will shape the future of humanity. Although the maritime domain is inextricably interlinked with Sustainable Energy Security (SES), many aspects are discussed in isolated silos. This book aims to fill in this gap by presenting a holistic view of the maritime dimension of SES. It includes various topics such as the global energy system, energy supply chains, energy trade, shipping of energy commodities, energy markets, protection of maritime energy supply lines and the role of military in providing maritime security. It also focuses on harnessing offshore energy resources, both hydrocarbons and marine renewable energy and discusses the developments in lowering emissions from the shipping sector. The book is written for the general reader as well as students who are undergoing a course in energy systems, maritime management, naval studies and energy sustainability. The content is tailored to meet the intellectual curiosity of the inquisitive reader and introduces various specialized topics which are dealt in a simple and concise manner. It is hoped that this book would bridge the gap in the understanding of the maritime dimension of SES.

Kapil Narula is an electrical engineer, development economist, and an energy and sustainability professional. His career goal is to “to provide a leadership role to the world, onto a path of sustainable development”. Kapil has a PhD in Development Studies (with a focus on energy economics and energy policy). His PhD studies were interdisciplinary in nature and integrated the subjects of engineering, economics, social sciences, earth sciences and statistics in a system of systems approach. He also has an advanced university degree in Electrical Engineering and a first level degree in Engineering and Science. Kapil is a certified energy auditor and has hands on experience in power generation and distribution.

He served the Indian Navy as an officer for 21 years where he worked onboard ships, as a faculty at academic institutes, and as a researcher. He has a rich experience in the energy and the maritime domain and was a core member of the team which formulated the energy and environment roadmap for the Indian Navy. In the past Kapil has worked as a Research Fellow at a maritime think tank at New Delhi, India; at Project Drawdown Coalition, Sausalito, CA, United States; and at Earth System Governance Project, Lund University, Sweden. He is an affiliate of the Global Association of Risk Professionals (GARP) and a MIT Climate Co-Lab Catalyst. Kapil has participated in various international programs organized by reputed institutes such as IIASA, Vienna (2011); UKERC, Coventry (2013); Santa Fe Institute, New Mexico (2015), IEA, Paris (2016), IASS, Potsdam (2016) and was a Commonwealth Professional Fellow at UCL, London (2016). Kapil currently works as a Senior Researcher at the Chair for Energy Efficiency, Institute for Environmental Sciences (ISE) at University of Geneva, Geneva, Switzerland. Kapil is the co-editor/co-author of six books on maritime issues and his papers have appeared in Energy, Energy Policy, Renewable and Sustainable Energy Reviews, Applied Energy (Elsevier), Strategic Analysis (Routledge), Oxford Energy Forum, and in other international and online forums. He was the executive editor of the journal ‘Maritime Affairs’ published biannually by Taylor & Francis for three years and is a reviewer of many energy journals.
Show all