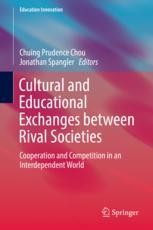 Cooperation and Competition in an Interdependent World

This book stimulates discussions on cultural and educational exchanges between rival states and societies, raises awareness of the potential positive and negative impacts of such exchanges, and serves as a basis for future research and program design. Cultural and educational exchanges in various forms have existed for millennia. Yet it was not until the unprecedented human devastation of two world wars catalyzed a sense of urgency around the world that a new era of cultural and educational exchange programs emerged as a means of easing tensions between rival states and societies. This book is motivated by the need for critical research that can contribute to building a more comprehensive understanding of the issues at stake. It begins with a historical overview of cultural and educational exchanges between rival societies, an assessment of their positive and negative impacts, and a review of some of the most prominent theories in relevant fields. It then presents a diverse set of case studies, in which authors consider not only the real or expected benefits of such exchanges but also the potentially negative impacts, challenges faced along the way, and broader effects on the rival societies at large. The states and societies considered include North Korea and the West, Bosnia and Herzegovina, Israel and the Palestinian territories, India and Pakistan, China and Taiwan, Cuba and the US, and China and the US. Taken together, the chapters demonstrate that exchanges have observable impacts on the individuals and institutions involved. Moreover, they reveal that exchanges have the capacity, in some cases, to affect broader social and political change at the family, community, society, or state level, but these impacts are indirect and typically require long-term concerted efforts by those involved.

Chuing Prudence Chou (周祝瑛) received her PhD in Comparative and International Education from the University of California, Los Angeles (UCLA), and is a professor in the Department of Education at National Chengchi University (NCCU), Taiwan. She is also a senior Fulbright scholar. Her research interests include comparative studies on international higher education reform, gender equity in education, and cultural exchange in rival states. She has written numerous books, journal articles, and other publications on these issues in both Chinese and English. Her most recent English-language titles include Chinese Education Models in a Global Age (2016), The SSCI Syndrome in Higher Education: A Local or Global Phenomenon (2014), and Taiwan Education at the Crossroad: When Globalization Meets Localization (2012).

Jonathan Spangler is the President of the Asia-Pacific Policy Research Association and Director of the South China Sea Think Tank. He received his PhD in Asia-Pacific Studies from National Chengchi University (NCCU) in Taipei, Taiwan. His primary research interests include Asia-Pacific regional security, maritime territorial disputes, and cross-strait relations, with an emphasis on the effects of different actors’ foreign policies on regional trends and volatility. He has over fifteen years of experience as an educator, having taught courses related to international relations, education, sustainable development, and a diversity of other fields. His books, reports, academic articles, analyses and commentaries, reference materials, and other publications have been widely recognized and used by policymakers, researchers, students, and the media in various fields. Raised in Boulder, Colorado, he has lived and worked in six countries in North America, Latin America, and East Asia, including the past eight years in Taiwan.