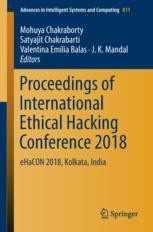 This book discusses the implications of new technologies for a secured society. As such, it reflects the main focus of the International Conference on Ethical Hacking, eHaCon 2018, which is essentially in evaluating the security of computer systems using penetration testing techniques. Showcasing the most outstanding research papers presented at the conference, the book shares new findings on computer network attacks and defenses, commercial security solutions, and hands-on, real-world security experience. The respective sections include network security, ethical hacking, cryptography, digital forensics, cloud security, information security, mobile communications security, and cyber security.

Mohuya Chakraborty presently holds the post of professor and head of the department of Information Technology, Institute of Engineering & Management (IEM), Kolkata. She also holds the post of head of Human Resource Development Centre, IEM. She has done B.Tech and M. Tech from the Institute of Radio Physics and Electronics, Calcutta University in the year 1994 and 2000 respectively and PhD (Engg.) in the field of Mobile Computing from Jadavpur University in 2007. She is the recepient of prestigious Paresh Lal Dhar Bhowmik Award. She is the member of editorial board of several International journals. She has published 3 patents and over 80 research papers in reputed International journals and conferences. She has handled many research projects funded by the DST, AICTE, CSIR and NRDC, and has published a number of papers in high-impact journals. Her research areas include network security, cognitive radio, brain computer interface, parallel computing etc. She is a member of IEEE Communication Society, IEEE Computer Society and IEEE Computational Intelligence Society as well as the faculty adviser of IEEE Communication Society and IEEE Computational Intelligence Student Branch Chapters of IEM , Kolkata Section.

Satyajit Chakrabarti is Pro-Vice Chancellor, University of Engineering & Management, Kolkata and Jaipur Campus, India and Director of Institute of Engineering & Management, IEM. As the Director of one of the most reputed organizations in Engineering & Management in Eastern India, he launched a PGDM Programme to run AICTE approved Management courses, Toppers Academy to train students for certificate courses, and Software Development in the field of ERP solutions. Dr. Chakrabarti was Project Manager in TELUS, Vancouver, Canada from February 2006 to September 2009, where he was intensively involved in planning, execution, monitoring, communicating with stakeholders, negotiating with vendors and cross-functional teams, and motivating members. He managed a team of 50 employees and projects with a combined budget of $3 million.

Valentina E. Balas is currently an Associate Professor at the Department of Automatics and Applied Software at the Faculty of Engineering, University “Aurel Vlaicu” Arad (Romania). She holds a PhD in Applied Electronics and Telecommunications from the Polytechnic University of Timisoara. She is the author of more than 160 research papers in refereed journals and international conferences. Her main research interests are in Intelligent Systems, Fuzzy Control, Soft Computing, Smart Sensors, Information Fusion, Modeling and Simulation. She is Editor-in-Chief of the International Journal of Advanced Intelligence Paradigms (IJAIP), an editorial board member of several national and international journals and an expert evaluator for various national and international projects. She is a member of EUSFLAT, ACM and the IEEE, TC – Fuzzy Systems (IEEE CIS), TC – Emergent Technologies (IEEE CIS), TC – Soft Computing (IEEE SMCS) and IFAC’s TC 3.2 – Computational Intelligence in Control.

J.K. Mandal received his M.Sc. in Physics from Jadavpur University, Kolkata, West Bengal in 1986 and his M.Tech. in Computer Science from the University of Calcutta. Prof. Mandal was awarded his Ph.D. in Computer Science and Engineering by the Jadavpur University in 2000. Presently, he is working as a Professor of Computer Science and Engineering and former Dean, Faculty of Engineering, Technology and Management at Kalyani University, Kalyani, Nadia, West Bengal for two consecutive terms. He started his career as a Lecturer at NERIST, Arunachal Pradesh in September 1988. With 28 years of teaching and research experience, his major research areas include coding theory, data and network security, remote sensing and GIS-based applications, data compression, error correction and visual cryptography. He has been a member of the Computer Society of India since 1992, CRSI since 2009, ACM since 2012, IEEE since 2013 and Fellow Member of IETE since 2012, as well as Honorary Chairman of the CSI Kolkata Chapter. He has chaired more than 30 sessions in various international conferences and delivered more than 50 expert/invited lectures in the past 5 years. He has acted as program chair for several international conferences and edited more than 15 volumes of proceedings from Springer Series, Science Direct etc. He is a reviewer of various international journals and conferences. He has over 360 articles and 6 published books to his credit.