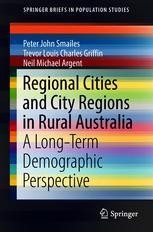 The book examines the extent to which the sustained population growth of Australia’s heartland regional centres has come at the expense of demographic decline in their own hinterlands, and, ultimately, of their entire regions.  It presents a longitudinal study, over the period 1947-2011, of the extensive functional regions centred on six rapidly growing non-metropolitan cities in south-eastern Australia, emphasising rapid change since 1981.  The selected cities are dominantly service centres in either inland or remote coastal agricultural settings.  The book shows how intensified age-specific migration and structural ageing arising from macro-economic reforms in the 1980s fundamentally changed the economic and demographic landscapes of the case study regions.  It traces the demographic consequences of the change from a relative balance between central city, minor urban centres and dispersed rural population within each functional region in 1947, to one of extreme central city dominance by 2011, and examines the long-term implications of these changes for regional policy.  The book constitutes the first in-depth longitudinal study over the entire post-WWII period of a varied group of Australian regional cities and their hinterlands, defined in terms of functional regions.  It employs a novel set of indices which combine numerical and visual expression to measure the structural ageing process.

Dr. Peter Smailes is a Visiting Research Fellow, formerly Senior Lecturer in Geography, in the Hugo Centre for Migration and Population Research, School of Social Sciences, University of Adelaide.  He has previously held academic positions at the University of New England, Flinders University, and the University of Oslo, Norway. He has held offices as President of the Royal Geographical Society of South Australia, head of the University of Adelaide’s Department of Geography, founding chair of the Rural Study Group of the Institute of Australian Geographers.He was a pioneer in the mapping of the invisible geography of personal identification with place and spatial patterns of place attachment at several levels of resolution.  He has demonstrated the relative importance of rural population density, remoteness, settlement concentration/dispersal, town size, and environmental amenity as drivers of viability/vulnerability of Australian rural communities. In collaboration with the co-authors of this proposed volume, he has focused on the spatially uneven impact of structural and numerical ageing in rural and regional Australia and its likely long-term consequences.

Dr. Neil Argent is Professor in Human Geography in the Division of Geography and Planning at the University of New England.  Neil’s research has broadly focussed on the geography of rural economic, demographic and social change in developed world nations.  Via a series of Australian Research Council Discovery-Project grants he has helped demonstrate the impact of financial sector restructuring on rural town economies, the relative importance of population density in influencing the demographic and economic characteristics of rural communities, the role of amenity as a driver of inter-regional migration into rural areas, and the dimensions, causes and implications of youth migration for sending regions and localities.  With the co-authors of the proposed volume, Neil has investigated the processes underlying demographic decline and numerical and structural ageing across the rural regions of south-eastern Australia.  He is also currently exploring the extent to which mineral and energy royalty schemes facilitate economic and social development in Canada and Australia, and documenting the rise of the craft beer brewing sector in rural Australia, along with its contribution to local economic development.

Mr. Trevor Griffin was a major contributor to the research presented in this volume. His untimely death has prevented him from participating in the final presentation of the work.  He served as lecturer, subsequently Senior Lecturer in the Department of Geography, University of Adelaide. His expertise was in cartography and statistical analysis, and with Professor M.McCaskill of Flinders University he was co-editor of the iconic Jubilee 150 Atlas of South Australia.Trevor was responsible for the vast majority of the work of developing, updating and maintaining the detailed social catchment database spanning thirty years, on which much of the analysis in the proposed book is based.